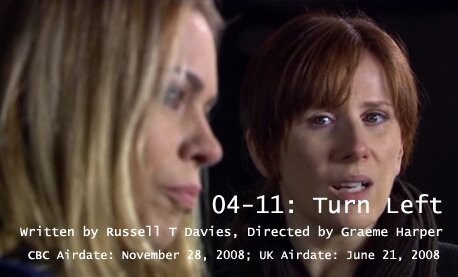 The Big Idea: Donna is given a chance to change a fateful decision and her actions radically alter the universe. Only a mysterious blond woman seems to be able to help.

Quick Bits of Trivia: The time beetle is part of the Trickster’s Brigade. It is implied that the Trickster is the same being that has featured in The Sarah Jane Adventures’ stories, Whatever Happened to Sarah Jane and The Temptation of Sarah Jane. Chipo Chung previously appeared in Doctor Who playing Chantho in the series 3 story Utopia. This was a story which writer Russell T Davies had in mind right from the outset of planning series four, even before it was confirmed Donna would be back: according to Russell T Davies’ new book The Writers Tale, the original companion for series four, Penny, was to make a decision at a turning during the season opener, only to have it revisited 11 episodes later. This was revised for Donna when Catherine Tate came back.

Not to Complain But… The whole Titanic plot point must have come out of left field for most CBC viewers who wouldn’t have seen the 2007 Christmas special Voyage of the Damned (as the network has yet to broadcast the special). Regrettably some really nice scenes didn’t make it into the story as it’s original BBC broadcast length of 50 minutes had to be trimmed to fit into the allowed timeslot.

All Things Considered… Double banked episodes (Doctor-lite, and sometimes companion-lite because the actors are busy shooting other episodes) are tricky beasts to manage. They can offer a chance for creativity and obvious off-beat format change (Love & Monsters), or brilliant storytelling slight-of-hand (Steven Moffat made us forget that the Doctor and Martha were largely absent from last year’s Blink). This year Davies proudly and confidently puts two large ostrich eggs in his basket by putting front and centre the strengths and talents of Catherine Tate’s surprisingly layered performance as Donna, and the building excitement of Billie Piper’s return to Doctor Who. While the latter offers a shot of adrenaline, it’s the former that really carries the piece.

Many were skeptical when it was announced last year the Catherine Tate would be reprising her role as bride-from-hell Donna from the 2006 Christmas special The Runaway Bride. While the character seemed to work in a one-off madcap special, how was she, and the broad comedy stylings of her portrayer, going to fare for 13 weeks. And then, wonder of wonders, Tate surprised us all (yes some were excited by her potential anyway, and some are still not impressed) by offering a textured, fully rounded portrayal.

And now, in Turn Left, she pretty much carries the entire episode on her shoulders and turns in an incredibly memorable performance. And to boot, she’s playing the character, more or less, from square one (not quite in Runaway Bride mode, but certainly a variation on a theme).

Our hearts ache for Donna and for the entire world, in the absence of the Doctor’s influence. When she tells Rose late in the story how tired she is, we really feel that sense of weariness. And Tate conveys it beautifully as scenes that span two years just sort of whip by in fan wankified glory. Most poignant were the scenes where Donna realizes where the “immigrants” are going, her final conversation with her near-catatonic mother, and when the beetle is exposed on her back.

It’s really nice to have Billie Piper back, even if her role is kept necessarily cryptic.

Something big is definitely in store for Donna in the coming weeks, and there have been multiple references of something bad to come. Is she slotted for a nasty end? Only time will tell.