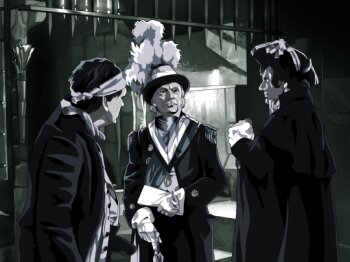 For those that hadn’t heard, it was announced a few weeks back that the Season 1 William Hartnell story The Reign of Terror will have it’s two episodes missing from the archives animated for its forthcoming DVD release in 2012. As we had previously been told that animations on missing episodes would be unlikely to ever happen again due to the issue of cost (the earlier animation of episodes 1 and 4 of the 8 part Patrick Troughton story The Invasion only being possible apparently because of an influx of money from the BBC Doctor Who website that had originally been pencilled in for another project (likely another adventure for the original animated 9th Doctor, Richard E. Grant), this news is potentially huge. Not just for allowing viewers to sit down and watch The Reign of Terror in its entirety, but also for what it might potentially mean for other stories that have some or all of its episodes missing from the archives. If they can now feasibly afford to do two animated black and white episodes for a Doctor Who DVD release, the following stories also seem like likely candidates to be “completed” in this fashion:

The Crusade and The Moonbase have had their existing episodes already relased on DVD, but given the “Revisitations” box sets and releases of special editions of previously released stories from the rest of the classic series that is currently happening, it would seem silly not to re-release these stories, this time “completed” (and if they can afford it, having story-specific extras - there are none for those two in the Lost Stories box set). The Moonbase and The Tenth Planet would actually make sense as a new “early Cybermen” box-set.

Further down the list of likelihood would be any story that “only” has three episodes missing, then four, five, six, etc (again all of existing episodes from the list below have been released on DVD already, but that shouldn’t be an impediment given the other re-releases of stories that have been done). That order would be:

Then there’s Mission to the Unknown and The Dalek Master Plan. Technically, Mission to the Unknown is in “Tenth Planet” category given that there is only one episode from the story that is missing - in this case it is the entire story. Although as it is a teaser episode for the 12 part Dalek Master Plan (which is missing 9 of its 12 episodes) that I suspect it will not be released as a stand-alone even though it was originally broadcast as such. But I could be wrong. It does bring up the issue of possible “box-sets” that have more than one story to help out with spreading out the cost of animation. The two Troughton Dalek stories seem like a good pairing, as do the two Yeti stories. The Myth Makers and The Massacre as a historicals set, and so forth.

This time the animation is being handled by Big Finish (they are not doing the animation themselves, but they are arranging for it to be done). It may be curious that the audio-drama producers are invovled here but they are also launching their own animated line of sci-fi, so the opportunity actually dovetails nicely. And of course the folks at BF are huge Doctor Who fans. Hopefully they can find a way to make it all work. It may be too much to dream to see all of these stories’ missing episodes animated, but it’s a dream worth having.

Sil Would Be Proud >>

It does bring up the issue of possible “box-sets” that have more than one story to help out with scattering out the cost of animation. Thanks for a wonderful placement.

Reign, and any other animated completions, will be definite purchases for me.  Assuming it does okay $$ wise, I would assume we would at least see The Tenth Planet completed.  The early early cybermen could make for some nicely stylized animation.

I’ve never bought into the “it costs too much” argument. As the Big Finish arrangement shows, there are always alternatives, and there are plenty of animators - amateur and otherwise - who’d be willing to do this work so they could have their art associated with Doctor Who. Go on YouTube and you’ll find everything from a CGI-animated recreation of the trailer for The Web of Fear (audio only survives) which could be put on a DVD tomorrow, to a full-out anime pastiche of a Third Doctor story.

Not saying this stuff can be done for free, but I’d be happy to forego, say, a “what the locations look like now” or a profile of some costume designer, or even a full-out behind the scenes featurette, if the budget was allocated to an animated recreation. Especially in the case of The Tenth Planet, unless they’re holding out for someone to find a copy of Episode 4 in their basement, there really is no excuse, not with such an important story.

So I hope the Reign of Terror opens the floodgates for more of these. Maybe it might even push back the original timeline - reported by DWIN a couple years ago - that said the DVD line was going to be retired at the 50th anniversary.

This is a great article thanks for sharing this informative information. I will visit your blog regularly for some latest post. I have you bookmarked your site to check out the latest stuff you post.

Very helpful post. Very clear commentary and suggested phrasing are most impressive, as are his and your generosity in sharing this explanation and example.

I would love to see this animated. It is easy to see that you are impassioned about your writing. I wish I had got your ability to write. I look forward to more updates and will be returning.Thanks for the post.

I’m always wonder to get reviews the doctor who blog. Here included info is really complicated and I just surprise to read this inspiring news. Thanks for sharing with us.

Is the 4th episode in The Tenth Planet missing? because I can’t find it…I’m only able to come across the clips.

And I really love the soundtracks from The Crusade.

Actually I also read about this post from some Tarot reading site…are they all the same?

Moonbase needs animating! plus there is room for The Underwater Menace as it’s only 2 episodes that need animating now…pushing it at furthest, we could even see Galaxy 4 animated, though I doubt it sadly :(

i do agree with most of what you said, altow some thing are borderline, dv lottery .

Pluto’s weather is more active than we thought
With each batch of images that rolls in from New Horizons, scientists learn more about Pluto’s characteristics.

like the animations related activites.like what u are doing keep it up.

Hey, it’s great blog, you can not believe if I say, I read your blog regularly. Keep sharing !!

Thanks for sharing, Keep Posting.

A re-imagination of the life of Alexander the Great based on the novel of the same name by Hiroshi Aramata, the series was created by international team that sketched from the incomes of the worldwide animation community.