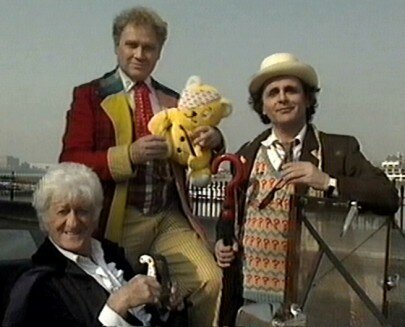 1993 was Doctor Who‘s30th Anniversary year, and despite the lack of a new series or proper new tv episodes, it saw the Anniversary celebrated in style and perhaps with more love than the BBC gave it in 1988 for the 25th Anniversary.

It was quite the wild year for Doctor Who. It started off with rumours heating up that the show would be back as a one-off tv movie to celebrate the 30th Anniversary that would be released on home video only. Then there was an official confirmation that Doctor Who would be back as a drama production - on radio. The Paradise of Death was a 5 part story that was to be broadcast in the autumn, featuring the return of Jon Pertwee as the Doctor with Elisabeth Sladen and Nicholas Courtney, in a story written by Barry Letts. As the months moved closer to the summer the rumours of the 30th Anniversary special heated up and finally in June it was reported that Doctor Who was back in production at the BBC as a television program - a one-off 90 minutes story called The Dark Dimension, featuring all five surviving actors to play the Doctor, to be shown on BBC1 and released on home video. The rumours were true!  After an incredibly long wait of 3 and a half years, we heard the news we were all waiting for - Doctor Who was back!

Unfortunately, just two days after hearing the official news of the return of Doctor Who to television, I received word that the special had in fact been cancelled. Hearing that news, after getting so excited for two days, was probably the most crushingly disappointing feeling I’ve ever had as a Doctor Who fan. We weren’t going to get a new story to celebrate the 30th Anniversary after all, and if we weren’t going to get a story made to celebrate something like the 30th Anniversary, it was starting to seem unlikely to even the most optimistic fan (which I probably was and am) that the show was ever going to come back. And it was also the first time that the word “cancellation” had actually been used to describe what they had done with Doctor Who since the show had ceased production in 1989. I always believed the show would come back but the time I believed in the least was probably the summer of 1993 following the death of The Dark Dimension.

Shortly after we did hear that there would be a 30th Anniversary charity skit that would only be about 15 minutes long. At the time I heard that news it seemed like a small consolation. I was probably more excited by the news that four of the actors to play the Doctor (Jon Pertwee, Peter Davison, Colin Baker and Sylvester McCoy) were to act together in a straight-to-video non-Doctor Who sci-fi story the The Airzone Solution. And more mollifying still was the news of an official documentary, Thirty Years in the TARDIS, that was to be made and shown on tv by the BBC in November.

In October the big news came - after years of telling us that they were looking into independent co-production for the show, it was reported in reputable BBC papers that the BBC were in negotiations with Steven Spielberg to make a new television series of Doctor Who. It was the hope that turned the tide in celebrating the 30th Anniversary in a positive mood. Jonathan Powell had now finally left the BBC and his replacement, Alan Yentob, was interested in getting new Doctor Who made for television. Armed with the tangible proof that the BBC were interesting in making Doctor Who again, a November 1993 spent listening to The Paradise of Death, watching The Airzone Solution, Dimensions in Time and Thirty Years in the TARDIS was made a much more positive and uplifting experience as a result. By the time the 30th Anniversary year had ended, all doubts that the show would ever come back had forever been exterminated. As I watched the Dalek at the end of Thirty Years in the TARDIS repeat “We shall return!” over and over again, I had come to the conclusion that Doctor Who not only was going to come back to television - it absolutely had to.

I’m not sure which planet you were living on… although all these things were accomplished, and there were Doctor Who anniversary conventions at the SkyDome hotel, the Ramada in downtown Montreal and of course Visions in Chicago, the outcome of the year seemed much more ambivalent to me. Especially the Spielberg news sounded like crying wolf, considering the outlandish rumours that had by then been swirling for years, and would continue until late 1995.

The planet I was living on appears to have been this one, given that the Spielberg news turned out to be both true & ultimately the independent co-production which yielded new TV Who. The Spielberg news was even mentioned in 30 Years in the TARDIS with a recorded quote from Yentob about the negotiations, placed at the end in part to give fans encouragement & hope. The above inclusion, the Spielberg name being the sort of US co-production deal that many assumed the BBC were looking for (after ignoring so many others from the UK) and where the news of Amblin deal had been reported (in the top UK papers - previous co-production bids generally only made it as far as DWM or DWB) all set this news apart from the other news of co-production bids that had failed.

In the end, Spielberg and Amblin had nothing to do with the TV movie production. And in hindsight, we could have critiqued the plan even at that stage by looking out beyond the pilot. So you’re telling me that at one time the BBC (BBC Enterprises in particular) were going to take this property that has done so much for them (BBC Worldwide) since 2005 and send it overseas to be piloted by Amblin and an unnamed broadcaster? Scratch that, by Universal and Fox during a corporate takeover period? Fine, there’s a 90-minute pilot I can buy the DVD of. But am I surprised it didn’t go to series despite being modestly successful? No. Setting aside the boardroom nightmares, it wasn’t that ripe yet.

Russell T. Davies hadn’t done Springhill yet, hadn’t written ‘Damaged Goods’ yet, hadn’t freshened up this old rubbish in Queer as Folk yet. Mark Gatiss hadn’t done League of Gentlemen yet, Moffat had finished Press Gang but hadn’t done ‘Continuity Errors’ or Coupling yet, the BBC didn’t hold the licence to do their own books yet, Big Finish didn’t exist, Paul Cornell had only written two books, Rob Shearman would not be stopped writing for theatre for some time yet, David Tennant hadn’t done Blackpool yet…

Perhaps ‘Dimensions in Time’ isn’t the archetypal BBC Enterprises version of Doctor Who. I mean it has a helicopter in it, think of the money. Perhaps the video version of ‘Shada’ (1992) is more typical of their work. Cheap, narrated by an old Tom Baker, produced by a getting-up-there John Nathan-Turner, all of the expenses had been paid years earlier, Douglas Adams had mistakenly signed off on the project and it had his name on it. New talent? New ideas? Who cares?

To be honest, I am not sure what you are talking about or trying to say. My point is that at the time the Spielberg news gave fans like myself (and others I knew) hope when it seemed that all was lost earlier that summer. The fact that Philip Segal would leave Amblin a couple of years later and bring Doctor Who back on his own rather than as an Amblin/Spielberg production is neither here nor there to what the feeling was in 1993. Same with whether anyone surprised or not about whether the TV movie ended up being a one-off rather than leading to a series - that’s something to deal with in the 1996 entry, not 1993.

I’m impressed, I must say. Seldom do I encounter a blog that’s both entertaining,  and without a doubt, you have hit the nail on the head. The problem is an issue that too few people are speaking intelligently about.I’m very happy that I stumbled across this in my hunt for something concerning this.