DWIN > Doctor Who Blog > 2nd half of the season coming soon…..

2nd half of the season coming soon….. 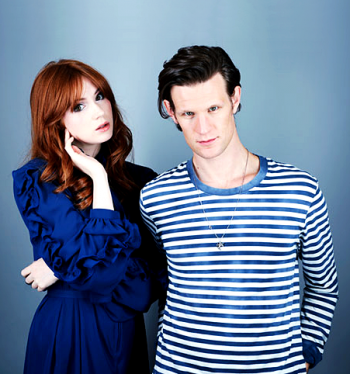 BBC America and Space have announced that they will be showing Let’s Kill Hitler! - Episode 8 of the current season and the first episode of the second half of the season - on August 27th 2011. Although BBC1 has yet to make a formal announcement, it is likely with the current “same day broadcast” agreement in place that they too will be showing the episode that day (the BBC are doing a preview screening of Episode 8 on August 15th, which also makes this a likely date), to kick off a run of the final 6 episodes of the season. The news came at the San Diego Comic Con this past weekend, which was attended by Matt Smith and Karen Gillan.

The news is a little bit surprising as a September date had been everyone’s best estimate for the start of the 2nd half of the season, as one of the reasons cited for the break in the season was to avoid showing episodes in the summer when fewer people are indoors watching tv due to the typically nice weather. I do not know of anywhere in the northern hemisphere that wouldn’t count August as part of the summer - so the ratings are still likely to be adversely affected by summer at least for the first few episodes. Still, I suppose that we shouldn’t be complaining about getting new Who sooner than expected.

A spoiler-filled trailer for the second half of the season can be found at the BBC Doctor Who website here. A warning though - as mentioned, the trailer is so full of spoilers you almost need to watch the trailer twice just to count them all. Only click on that link if you don’t mind having a number of intriguing and revealing spoiler images provided to you in advance of August 27th (it hasn’t been imbedded on this website for a reason!)

<< Sil Would Be Proud

Well, one thing to consider about the date August 27th is that in the UK school is already back in session then, so technically their summer is over as classes have begun already. With that considered it does make sense.

This has come sooner than I expected. A little early perhaps to guess at but whats the general feeling about when series 7 will air. I would be willing to bet that it will be next fall. I remember when they first announced the splitting up of series 6 Steven Moffat said that the good side of that was that there wouldn’t be more than a few months between new Doctor Who episodes, which kind of sold me on that decision. However if I am right in assuming series 7 returns in the fall then we will be looking at another year before new episodes. (well, okay after this year’s Christmas special it will possibly be 9 months but it will feel like a year!)

Well all the people who wanted it on darker autumn nights will be disappointed. The fact that they can always get them and watch them a few months later whenever they want doesn’t seem to occur!

It’s probably a few weeks earlier than I would have expected until they announced a while back about the press screening in August.

Sean: UK schools don’t go back until September, and generally the first full week of the month. There will actually be two episodes aired before many children return to school!

Somthing I only remembered today: One of the BBC’s staples in the fall is Strictly Come Dancing, and as this is a live program, I would imagine it’s harder for that to be pushed around. It’s probably on in the same time slot as Doctor Who, therefore I’d persume that Doctor Who is going to air between August 27 and October 1, before making way for SCD for the rest of the autumn schedule. I completely forgot about this earlier in the year, and also the fact that there are other programs on their schedule that are aired every Saturday night that the BBC are more reluctant to change their time slots.

Obviously this year has been a real experiment for the BBC, and it won’t take more than a couple of episodes to show them how well it has (or hasn’t) worked out. Yes, the first episode of the second half might take a hit on the ratings (especially as it’s being aired over a long weekend), but they’re probably going to hope to catch some viewers who perhaps wouldn’t normally watch television. We will just have to wait and see what the BBC, BBC America and Space report later in the summer.

well, I’m an American, so I have no idea about how ratings in England are affected, but in the us, if you like doctor who, you are OBSESSED and wouldn’t miss it for anything

I was a bit surprised by the date because in the past the BBC has generally avoided running Doctor Who and Torchwood at the same time. Now, at least here in Canada, we’re going to get to have DW and Torchwood back to back for a few weeks. I think the BBC wanted to get the second half of Series 6 finished in order to allow enough time to arrange a Christmas season release for the full season box set (you didn’t think those half-season releases were it, did you?), plus BBC One is supposed to air the final episodes of The Sarah Jane Adventures in October, and I think they’ll air them in DW’s timeslot.

How odd - someone just posted to Space’s website a comment claiming that TV Guide Canada (which I didn’t know still existed) was claiming Aug 6 as the debut date for the new season! Wow, were they wrong!

^ I just heard back from the TV Guide writer who said it was some weird error that snuck in between her writing it and it getting on the website, so it’s been corrected.

Nice work! Awesome post!
Thanks a lot for advertising it! I am fond of such TV Personalities. I’ll definitely catch it up. Thanks a lot!

Bravo!
I do appreciate your site’s simplicity and the thing that you have marketed such TV Personalities.

Such a nice posts! I will surely come back to read more news form you!

Just a wonderful site to visit!
I may try watching this TV Personalities you are endorsing!

I will surely try to watch this. It seems interesting and your site too. Thanks a lot for sharing it. I will soon be back and have another updates on TV shows and personalities. I really enjoy watching kinds of shows. Thumbs up!

This TV Show seems interesting. And I can see that it provides enjoyment.

Keep it up. I’ll wait for your other novels or shows to recommend. Thumbs up!

Great! It is already in it’s 2nd half of the season.

I have heard that this was a good TV show and so I’ll give it a try on watching out this next season.

Thanks a lot for sharing this one.

Interesting blog! always offer the best and authentic information without creating exaggeration. This blog has given me opportunity to learn many things.

This information is really interesting for me and I like your way as you describe it. I hope you will share more informative post in future.

Make your life time easier take the credit loans and everything you want.

I haven’t watch the 1st season yet but they say that it has a nice story.

Anyways, thanks a lot for sharing this.

Oh, seems interesting.
You had a great work posting such entertaining topic as this and updating every readers.

It is difficult to perform the smashing custom written essay. But the essay writing service would do this simply and rapidly.

Costs for academic papers form according to customers’ demand. People purchase hundreds of essays lastly. Thus, we can expect raising of prices. Nonetheless, I think, that’s real to detect the grant writing company , which can offer reasonable prices for research papers.