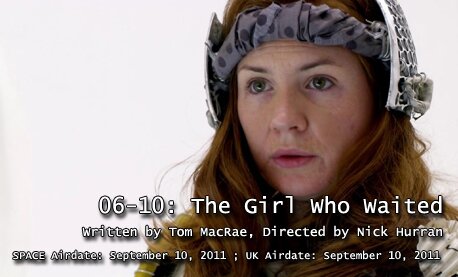 The Big Idea: In a plague hospice, Amy gets separated from the Doctor and Rory and winds up living 40 years without them in timey-wimey fashion.

Some Quick Bits of Trivia: Older Amy was meant to be played by another actress but Karen Gillan asked to play the role, which involved her meeting a voice coach to get the nuances of playing an older role correct. With only four actors appearing on screen, an actress on a video screen and Imelda Staunton’s stuntcasted voice role, this features the smallest cast for a story in the New Series—even more so when you consider this was effectively a “Doctor-lite” story (Matt Smith only appears in the opening sequences and in the TARDIS).

Things To Geek Out About…

Not To Complain, But… At some point you would think in the midst of older Amy being bitter about being left behind for four decades, Rory would eventually say, “Um, yeah,  I waited two thousand years for you, honey.” But that’s Rory all over; he’s probably the sort of guy who doesn’t mention he’s been saddled with laundry duty over three consecutive weeks…

All Things Considered: On paper, this should have been the most cerebral Doctor Who story this season – and that’s saying something. It’s hard science fiction involving time travel and parallel lives and being forced to choose one alternative timeline over another and the ethics behind such a decision. But Tom MacRae’s genius is that he makes those big ideas come alive by connecting it to the characters.

Older Amy doesn’t want to give up her life and that, frankly, feels utterly right. Amy is the sort of person who, to put it generously, lives in the moment. There’s a certain pragmatism to Amy and her not wanting to have four decades of lived experience erased feels honest: Amy only has her miserable, eked-out existence to fall back on. It’s heartbreaking in its truth. And Karen Gillan’s performance is spot-on in conveying that.

What really grounds everything is Rory. He anchors the timey-wimey weirdness in reality for the viewer by being so blunt in his conversations with the Doctor and by ultimately being the motivation for both Amys. The scenes where younger Amy convinces her older self to help her by recalling Rory pretending he was in a band to justify a bad haircut is beautiful, as is the scene where both remember their first kiss with Rory. The result of all this is a scenario where the ideas don’t just dazzle the mind, they come to life. Everything connects to the viewer in a meaningful way.

And then there’s the ending. It was hard to know how this would end, and there was the worry it would be it would be some timey-wimey maguffin that would only be partially satisfying and Rory would get what he wanted with Amy and older Amy would get what she wanted in some way. But, no. With the Doctor slamming the door older Amy’s face is Occam’s Razor-like in the simplicity by which it settles the debate. The Doctor has lied. There is no way to save both Amys. It resolves the plot neatly but it also gives the kick to the gut needed for good drama. We feel older Amy’s loss poignantly. Giving Rory the decision is needless. He’s too cowardly to give in. All older-Amy can do is tell Rory to not open the door – not to sacrifice herself. No, it’s in an attempt to maintain whatever dignity she has left.

By appealing to both head and heart, The Girl Who Waited is one of the finest, if not the finest story this season.