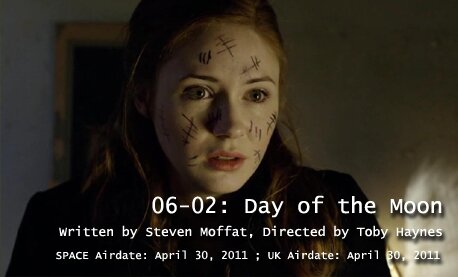 The Big Idea: The Doctor, Amy, Rory, River Song and Canton Everett Deleware the third mount a revolution against the Silence… but how do you destroy something you can’t remember seeing?

Some Quick Bits of Trivia: Steven Moffat, incredibly, managed to keep the ending of this story out of the British press after screening both parts before the season simply by asking them not to spoil it. Of course there were whole pages on internet forums spoiling it thanks to people who saw both parts at screenings in New York and Chicago, but even they managed to keep quiet. Well done, everyone.

Things To Geek Out About…

Did You Notice: When Amy wakes up in the Silence’s time engine, the Silence keeps reiterating to her that she has been there “many days” and her memory is weak. She no longer has the number of Silence marked on her face. And she is honoured because she will “Bring the Silence.”

Not To Complain, But… It’s a really clever way of getting the humans to rise up against the Silence by giving them a subliminal command to kill any Silent they see, but wouldn’t people then notice a lot of dead aliens lying around, bullet holes in the Oval Office…and wouldn’t the Silence react defensively?

All Things Considered… It’s a hugely dense episode, and in some ways that’s a little worrisome. Part of what has made Doctor Who work has been that it’s a game everyone can play. Bringing in a story that’s an assemblage of so many dangling plot threads threatens to make it something only the cool kids get, like Lost.

Fortunately, Steven Moffat knows how to forestall this from happening, by simply turning up the cool factor up another couple of notches. The whole opening sequence basically shoves the resolution of the last episode into a 15 second flashback that amounts to “stuff happens” but is just so brilliantly cool as we see Deleware pursue Amy, Rory and River while they learn about the Silence, all the while, the Doctor is in Area 51 in a straightjacket. And all this turns out to be a massive con for the benefit of the Silence. It’s great.

The rest of the episode compensates dangling plot threads for coolness. Amy’s “shroedinger pregnancy” is offset by the incredibly creepy sequence in the Children’s Home (and kudos to Kerry Shale, for what may be the creepiest performance in new series history) and the really sweet way it brings together Amy and Rory. The Silence’s whole plan, the identity of the Astronaut and the last moment of the program and its impact on the Doctor’s death in The Impossible Astronaut—all of which make my head hurt just thinking about it—have the compensation of the white hot moments with the Doctor and River, the charm of Deleware, the comedy value of having Nixon show up at key junctures, and the payoff of making Neil Armstrong’s speech on the moon the method of ridding the world of the Silence.

Alex Kingston and Matt Smith are finally let loose and you can see how and why this pair would hook up, and the darkness in River that attacts her so to the Doctor. But the absolute revelation of this story is Karen Gillan, who manages to bring so much to Amy in both episodes, plumbing the depths of depair and fear and engaging the audience in new and exciting ways. It’s as though Gillan realized she needed to bring her game up to match with Smith, Kingston and Darvill and decided to better them all. If so, job done.

So much of Day of the Moon is left unanswered and unsolved. But that’s OK, for now, so long as we have as so many cool moments to make it worthwhile as we do this week.

Line of the Week: (Rory, to River) “What kind of doctor are you?” (River shoots a Silent) “Archaeology. Love a tomb.”