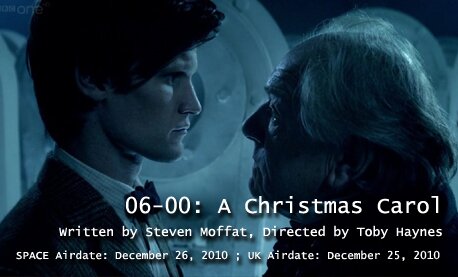 The Big Idea…Amy and Rory are on their honeymoon on a galaxy class spacecruiser which is going to crashland on an alien world. The only man who can save them, Kazran Sardick, isn’t interested in doing so—leaving the Doctor to borrow a page from Dickens to change his heart.

Some quick bits of trivia:. The basic idea of this story featured in Steven Moffat’s 1996 short story “Continuity Errors” in the Doctor Who anthology Decalog 3. In that story, the seventh Doctor kept changing the personal history of a librarian—making her life better and making her a nicer person in the process—so he can get access to a restricted book to stop an intergalactic war. This story features opera singer Katherine Jenkins (who played Abigail Pettigrew) in her first acting role. On its UK broadcast, this episode garnered overnight ratings of more than 10 million viewers.

Did You Notice… That we didn’t appear to hear or see any reference the Silence (the plot string left dangling at the end of the last season and into the next one) at all? It is always difficult to tell at first glance with a Moffat tale, but it appears that (understandably) this Christmas day episode is one of the few Eleventh Doctor episodes that is truly a stand-alone adventure.

Not To Complain But… Those of us hoping that the theme music intro would be re-worked so that we no longer have the Muppets-Entering-the-Stage intro have been disappointed as the theme music remains unchanged from last season.

All Things Considered….  Writer Steven Moffat promised the most “Christmassy Christmas special ever” for Doctor Who and A Christmas Carol delivers on the promise – which is quite the feat considering that Moffat’s predecessor Russell T. Davies always made sure there was a substantial Christmas element in the five Christmas specials that he did. We not only get a Doctor Who version of the Dickens’ classic (complete with time travel twists that only Doctor Who can do), but we visit more Christmas eves in a single story than ever before, get several Christmas carols sung on screen and to top it all off, we get to see the Doctor imitating Santa Claus in both climbing down a chimney and then travelling on in the sky on a sleigh! Whereas Russell T Davies was often seen as comparing the Doctor to Jesus Christ, Moffat is clearly more interested in comparing him to Santa Claus (something referred to in Moffat’s first who script way back in 2005, The Empty Child).

As such, perhaps more than any other A Christmas Carol is a Doctor Who story that fans will probably not be in the mood to re-watch except around Christmas time – which perhaps makes it appropriate for the sake of future Eleventh Doctor viewing marathons that the story is a stand-alone which, from the face of it, has nothing to do with either the story arc from last season or the continuing story arc (concerning the Silence) into next season.

Despite the festive spirit that reigns throughout the story, Moffat does not get careless. Every plot development is explained and the resolution is prepared for ahead of time in the script. And after the entire universe was saved in the previous story, it is nice that the threat involved is much less epic - “only” the lives of 4003 people are at stake, proving that you don’t need the threat of world destruction for the audience to care what happens and for a Doctor Who story to work.

Matt Smith delivers another superb performance – it is only being mentioned here as a highlight because we are now so used to him and his Doctor that we are almost taking his excellence for granted. From his joyful exuberance (perfect for a story like this), to his soft enunciation when making threats, every range of emotion seems well within Matt Smith’s grasp.

If there’s a complaint some may have, it may be how little Amy and Rory have to do in this story. This is not the first time we have seen this sort of thing from Moffat – The Girl in the Fireplace sees Rose and Mickey with very little to do. In this sense, Moffat can be seen as more of a traditionalist, unafraid to have the Doctor as the main star of a story and to shelve the companions for large bits of the story if they simply do not serve the story being told (there are several classic series stories where this has also happened – Kinda, Terminus, The Ultimate Foe). It is likely entirely a matter of personal preference as to whether this occasional approach of Moffat’s with respect to companions is a good or bad thing.

Overall, as an exercise in making a Doctor Whostory as “Christmassy” as possible, it is unlikely we will see a finer example than A Christmas Carol.