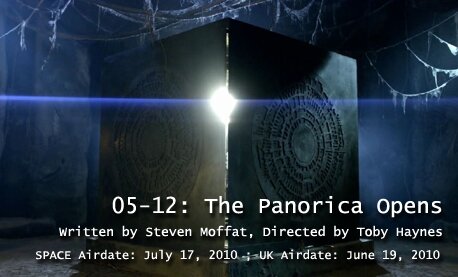 The Big Idea… According to legend, the greatest monster of all time was sealed into an impregnable prison called the Pandorica. Now, beneath Stonehenge in the year 102 AD, the Pandorica has been found… and it’s opening.

Some Quick Bits of Trivia: This is the first Doctor Who episode to be directed by Toby Haynes, who has worked on several other British TV series, including the early episodes of Being Human. Christopher Ryan returns as another Sontaran commander after his portrayal of Staal in “The Poison Sky”. Steven Moffat’s script asked for every monster that ever appeared in Doctor Who to be present in the final scene. In the event, he only got the ones that could be worn as a costume or a prosthetic (so no Pyrovile or Prisoner Zero), and even then only monsters that appeared after 2005 (so no Draconians!)

Did You Notice… This episode is more about answering questions than raising them… but when the Dalek Supreme insists that “Only the Doctor can pilot the TARDIS,” is that merely a misapprehension on its part, or should we be reading something more into it?

Not to Complain, But… The final sequence is riddled with many minor editing errors, as several of the characters—Daleks, Cybermen, the Sontaran Commander Stark—are seen to be speaking in long shot while remaining silent on the soundtrack. Also, Amy doesn’t appear to know what the Cybermen are despite having met them in the Adventure Game “Blood of the Cybermen,” which was marketed as being an in-continuity adventure.

All Things Considered… Most of what makes this episode so enjoyable is listed up in the “What’s So Great” section. The puzzle box at the centre of the episode is a metaphor for the episode itself; it’s a clockwork toy of an episode, and half the fun comes from watching all of the pieces slide into place, unlocking so many of the mysteries that have been teased out over the course of this season while setting up so very many more.

At first, it looks as if The Pandorica Opens is going to be about answers. The opening sequence is a multiple sequel to many of the season’s previous episodes, leading up to the revelation that this episode is going to be about the Pandorica and the destruction of the TARDIS. And that’s exactly how the Doctor treats the story at first. As one of his previous incarnations sort of said, he’s serious about what he does, if not how he goes about it; and while he’s very aware of the stakes he’s playing for, there’s still a gleam in his eye as he stares at the Pandorica. “What could you possibly be?” he breathes, and he can’t wait to find out.

And then, in the last ten minutes, everything is turned on its head, and we learn what the story’s really about. The closing sequence is a multiple sequel to almost every single previous episode ever, as every alien race the Doctor has ever defeated springs the most terrible trap on him—and it’s all the more terrible because the Doctor has really brought this on himself. In hindsight, this was foreshadowed at the very start of the season, when he drove the Atraxi away from Earth with nothing more than the power of his reputation. Here, his attempt to do the same succeeds magnificently… or so he thinks, because that’s exactly what the alien alliance wants him to think. But even that gets flipped on its head when we learn why the members of the alliance are doing what they’re doing. We thought they ran away from the Doctor because they were scared of him. They didn’t. They only pretended to ran away from the Doctor… because they’re scared of him.

For so long in the new series, the Doctor has seemed almost godlike in his abilities. The Vashta Nerada and the Atraxi fled the moment they realised what this creature could do to them. Only the Doctor knows how much of that was pure bluff… and now his enemies have called his bluff in the worst possible way. As the pieces of the trap slide into place, he’s helpless, unable to save everything there ever was from never having ever existed… and it’s all because he’s been so good at his job up until now.

That’s The Pandorica Opens. The plot makes it fascinating. The dialogue makes it fun. The subtext makes it heartbreaking.

Line of the Week: “Dalek fleet, minimum 12,000 battleships, armed to the teeth—aah, but we’ve got surprise on our side! They’ll never expect three people to attack 12,000 Dalek battleships, because we’d be killed instantly, so it would be fairly short surprise. Forget surprise.”