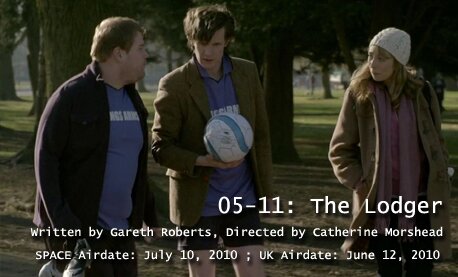 The Big Idea…Something has separated the Doctor from Amy and the TARDIS. In order to find out what’s happening, the Doctor must go undercover and rent a flat from a perfectly ordinary human being named Craig Owens. Craig doesn’t stand a chance, does he?

Some Quick Bits of Trivia: The Lodger was developed by Gareth Roberts from a comic first published in Doctor Who Magazine in March 2006, in which the Tenth Doctor has to move in with Mickey Smith for a few days after the TARDIS jumps a time track with Rose Tyler stuck inside. James Corden co-created the TV series Gavin & Stacey with Ruth Jones, who appeared in Torchwood as Nikki in the episode Adrift. And, of course, you all knew that Matt Smith was on his way to becoming a professional footballer before an injury made him consider acting instead, right?

Not to Complain, But… There are some minor but jarring editing continuity errors both before and after the football sequence. When Craig first introduces the Doctor to Sean, he then walks past Sean to greet another friend standing behind him, only to suddenly pop back in front of Sean just in time for his dialogue. When the motherly woman is fried by the time machine immediately after the match, the door to the upstairs flat is ajar in one shot and tightly closed in the next.

All Things Considered… Well, for a start, they’re finally pointing the camera in the right direction. The football match has been mentioned previously, but it needs to be said again: this sequence was a little masterpiece. Ninety-nine percent of the characters on the field are participating in the story of The Day The Doctor Won A Football Match, but the camera is paying much closer attention to Craig and Daisy’s reactions, and if you don’t feel for poor Craig as he stands uselessly on the field, surrounded by cheers aimed at someone else, then you, sir, have no soul.

Director Catherine Morshead demonstrates the same deftness of touch here as in Amy’s Choice. Camerawork, story, and character detail are all given equal attention, so that it’s the characters who drive the story forward and sweep us along with them. The tone turns on a dime from comedy to terror, and frequently manages to harmonise both notes simultaneously; look at how the comedy of the Doctor’s mistaken rant towards Sean morphs into the unease of the time loop kicking in, through the terror of the middle-aged woman’s death and into the tension of Amy’s predicament in the TARDIS, without ever once jarring the viewer out of the moment.

Another thing that this story has in common with Amy’s Choice is that the excellent directing smooths over what could have been some rather disturbing philosophical undercurrents. Where the previous story ended with Amy effectively choosing to kill herself after the loss of her lover, this story seems to punish the ambition to pull oneself out of a rut and reward the man who’s content with being a couch potato. It’s arguably the director who rescues the story from the fiery pits of allegory by focussing on the characters. We’re specifically watching the story Craig and Sophie, rather than Everyman and Everywoman, and Craig’s choice thus becomes something other than a triumph for laziness. The ship still burns until he admits his love for Sophie and she sticks her hand into the fire with him; it’s only at this moment that they’re both truly content with where they are. It’s sweet without being saccharine; little touches like Sophie’s “I love you too, you idiot,” and Amy rolling her eyes in disgust, both strengthen rather than undermine the emotion of the moment, again demonstrating Morshead’s mastery of the counter-harmonic.

Your reviewer’s favourite story trope is that of the perfectly ordinary human being with no skills, no special powers, no Chosen Destiny, who gets exposed to a world larger than they’d imagined, and yet rises to the occasion. This was that. It was funny, it was sweet, it was tense, it was all of the above; frankly, it was his favourite episode of the season, up to and including The Eleventh Hour.

Line of the Week: “Annihilate? No, no violence, do you understand me? Not while I’m around, not today, not ever. I’m the Doctor, the Oncoming Storm—and you basically meant beat them in a football match, didn’t you.”