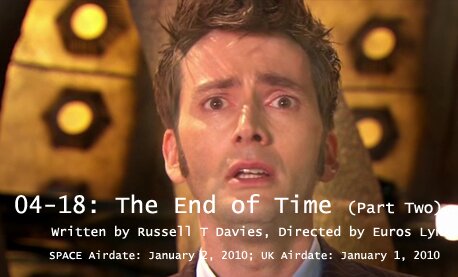 The Big Idea:  As the Time Lords prepare for their unholy return, the Doctor must escape the Masters’ clutches and avoid his inevitable fate.

Some Quick Bits of Trivia: Russell T Davies has stated that he wrote the scene where the Doctor saves Luke from the car as an in-joke to all the times in The Sarah Jane Adventures when the kids cross the street without any regard for oncoming traffic. David Tennant’s last scene in this story was greenscreen work during his fall into the Naismith Estate, though his last performance as the Doctor was in The Sarah Jane Adventures episode The Wedding of Sarah Jane Smith (and his last appearance in the Doctor’s costume was making a series of interstitial idents for BBC1’s Christmas programming). The Eleventh Doctor’s first scene is something of a regeneration behind the camera as well, as the scene was written and produced by incoming executive producer Steven Moffat.

Things to geek out about…

Not to complain but: Who invited the Vinvocci to the party? They’re annoying, obstructive and irrelevant. Martha Jones and Mickey Smith married!? Talk about the most contrived rebound relationship in history.  And the award for creepiest father/daughter pairing in television history has to go to the Naismiths.

All Things Considered: “We were always heading for this.” The Doctor’s words to Wilf are apt. For those who wondered how on Earth Russell T Davies would end it all, the answer was always apparent. After all the portents of doom, the shock and awe, returning Time Lords and maniacal Masters, it all came down to a quiet, simple choice for the Doctor. Straining to hear four small knocks, he regained his soul. But we were always headed for this, from the moment the Doctor began musing about what sort of man he was in The Christmas Invasion. It’s beautiful and poetic, but you have to look beyond the absurdity of a Time Lord president snapping his fingers to restore order, talking cactus heads who can heal entire planets or the physics of Gallifrey suddenly showing up in Earth’s orbit.

Some viewers will cry foul, an old fashioned case of “bait-and-switch” they’ll charge. We got this big epic story of the Master and the return of Gallifrey, but it came to not. In the end, both served merely as backdrop for the drama of a man facing his own death. Both are McGuffins meant to show distorted illustrations of the hunger to cheat the inevitable. Likewise, the revelation that “he will knock four times” is a deliberate misdirection to both the Doctor and the viewer. As if we haven’t learned by now that it was always the small character story at the heart of the spectacle (most of the important moments in The Parting of the Ways  happen on contemporary Earth, not on the space station!)

For five years we’ve seen the sadness, longing and regret in the Doctor over the loss of his home and his people. It’s then bitterly ironic to see them portrayed here as the villains of the piece. And yet strangely apt. For any viewers of yore, we were always headed for this—the Time Lords were always rather suspect in there motives (almost every classic Gallifrey story features a Time Lord turned no good!). Kudos to Davies for yet again turning expectation on its heads.

Davies is most interested in how we feel about the Tenth Doctor dying. To achieve this he has to involve the audience beyond the hermetically sealed narrative. Like the reprise of a symphony, we get a taste of all the themes present throughout Davies’ era of Doctor Who: striving for connection, the importance of the ordinary person, and mortality (try counting how many times since Rose we’ve heard that everything must die).

The End of Time Part 2 is ultimately a long-ish, uneven, gloriously messy rumination on death. It has to please a lot of masters, but at its core it seeks to engage the viewer directly in its story. And to paraphrase The Pet Shop Boys: “It was never being boring.”