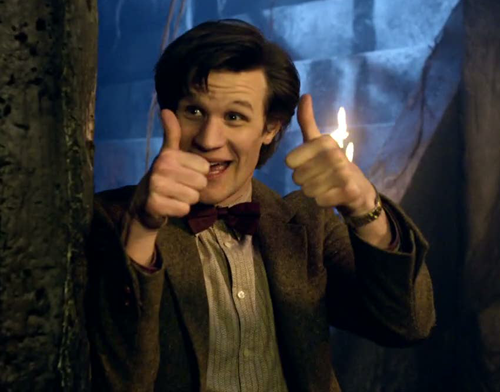 The BBC officially confirmed today via twitter that another 14 episodes of Doctor Who had been commissioned after the current run (which itself doesn’t conclude until the autumn), while Steven Moffat (also via twitter) confirmed that the next season will continue to star Matt Smith as the Doctor. One of the 14 episodes will be the 2011 Christmas special (confirmed by DWM on twitter, which I guess is the place for publicly confirming television plans - the BBC should feel lucky that it didn’t exist in the early 90’s or they would have set a record for most consecutive “Still no news on Doctor Who” tweets for every day over a 5 year period). According to an article in The Guardian that can be found here, a “good chunk” will be broadcast in 2012 - whether that’s the full remaining 13 episodes split over two halves (ie. like 2011) or whether there will be a delayed start with some of them spilling into 2013 remains unknown at this time (or if it is known, they aren’t yet telling anyone).

Either way, this should take Doctor Who right up to it’s 50th Anniversary year which is 2013, with the 50th Anniversary date being November 23rd - which falls on Doctor Who’s traditional broadcast day of Saturday. One has to figure that the plans for the anniversary season will soon be made, if they aren’t already…....

In the meantime, we can also give our thumbs up (just like Matt Smith is) to more Doctor Who - and with Matt Smith too!

Well I’m happy. For a couple days there was actually a rather intense cancellation scare going on, after Smith was quoted as saying he was looking for roles in Hollywood and the BBC hadn’t renewed the show yet. It’s pretty clear to me that the BBC is in the process of transitioning to a fall schedule, in part to fill the gap which will be left by Sarah Jane’s cancellation. And also, I bet, to line things up so that Series 8 coincides with the 50th anniversary.

A lot will depend on how well the ratings do this fall. A lot of pundits have said that DW’s ratings have never been as strong in a spring showing as they would be in a fall or even winter broadcast. So if the second half of Series 6 ends up blowing the roof off the ratings, that might result in the BBC deciding to make it a fall show again, like it used to be.

Anyway, now we know Smith isn’t going anywhere. Now the question is will Karen and Arthur be staying with the show. And if not, who will replace them (I have my personal favorites, but can’t talk about them till the mid-season finale airs in Canada).

It’s pretty clear to me that the BBC is in the process of transitioning to a fall schedule, in part to fill the gap which will be left by Sarah Jane’s cancellation

The scheduling of a children’s show, which aired on weekday afternoons, probably has 2% to do with the BBC’s decision making on this matter.

I suspect there’s a lot of things going on, most of which we’ll never learn publically.

Other options are that after this years split 6 and special that 2012 has a spring special(1) then a fall 6 (7) then another special (8) with the other 6 part of a multi- season 2013 of near 20 with a new year run in Jan to Feb, a spring run from Easter for 6 weeks then a fall run, 50th Anniversary special and then usual special.

I like your thinking but I think you’re being a bit optimistic about that much in 2013….50th or not!

Excellent post the information available here is great. I really like your post and i really appreciate that. I wanted to thank you for this excellent read.I’ll definitely be subscribing to your site. Web Hosting Pakistan

This information is really interesting for me and I like your way as you describe it. I hope you will share more informative post in future.I would like to thank you for the efforts you have made in writing this post. future of pharmaceutical industry

This will open your GP’s control panel. Individual panel layouts vary, but the settings you want to change are usually found in the three D section. To increase your graphics quality, increase the level of anisotropic filtering, shared details and texture quality. To increase performance, reduce these settings. You can also adjust these settings within a game, generally in the Options, Graphics or Graphics Options menus.

Beginning with the chaos of an exploding TARDIS rapidly descending on London, we plummet to earth with a newly regenerated Time Lord, yet plummet into the depth of power of the music of this sequence. Thanks a lot.

I actually really like Matt Smith as the Doctor. Matt Smith has now taken over the role of the Doctor in the iconic science fiction series Doctor Who. Thanks for sharing with us.

The twitter launched a verification program, allowing celebrities to get their accounts verified. Originally intended to help users verify which celebrity accounts were created by the celebrities themselves, they have since been used to verify accounts of businesses and accounts for public figures who may not actually tweet but still wish to maintain control over the account that bears their name. Thanks.

I was interested in Matt Smith’s take on Dr Who. A man who is intelligent and good at leadership. I would like to thank you for the efforts you have made in writing this post.

I have been long time fan of the doctor who. More Matt Smith-era who on the way for 2012! Thanks for pop up interesting pose!

Great informative post, I am happy to read it. I think really it is excellent, waiting for the next post soon. Thanks for sharing me.

I never really thought of fashion this way but after reading all that I can understand where you’re coming from.

I found the best free games for iPad 4 and iPad mini. iTunes is the world’s easiest way to organize and add to your digital media collection. To download the free app shapeMutantsVsU by RSZ International Inc., get iTunes now.

Just love your post!I have been long time fan of the doctor who. More Matt Smith-era who on the way for 2012! Thanks! cool pose!

hi thank you very much for writing such a lovely post its the post like them that make me reliaze that how great to have internet and how much effport you blogger put to transfer all theese information to us the general public really love the post and will come back soon to read more .if any body is searching for good

I liked how the thoughts and the insights of this article is well put together
and well-written. Hope to see more of this soon.

Era Skyville Apartments in Gurgaon ranges from luxurious to simple, from fully furnished to non-furnished, and from 2bhk to 4bhk.

I watched all episode of the T.V serial. Very interesting, thanks for sharing this nice post.