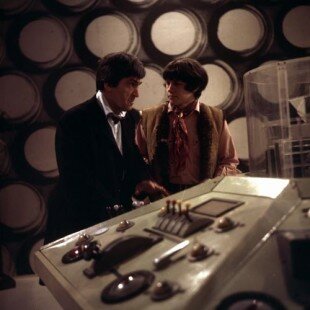 With the time flying by (its already February 2012….where did January go?) before we even know it we will probably know the extent of the BBC’s plans to celebrate the 50th Anniversay of Doctor Who next year. This is the big one - a milestone that should be celebrated like nothing else before, for which we will probably not have the same opportunity. Chances are, whatever they are planning will be exciting in itself, but the chances are that it won’t be exciting as all of the things which we might like to see happen. So until the announcements of what will happen occur, let’s take our chance to dream about what we might like to see happen. I’ll start off with the following.

1. Let’s get the obvious out of the way - a multi-Doctor special featuring all surviving Doctors, and re-use of old clips for the Doctors 1 to 3 and possibly Eccleston (assuming he refuses to take part - they can use deleted scene footage from his season, which would actually be new to us), with a clever Moffaty-way to incorporate the old clips into a new plot (you can see fans doing a half-decent-looking job of this sort of thing for fun on youtube - the BBC should have the money to make it look fully-decent).
2. Since Steven Moffat has hinted that there is to be more than one 50th Anniversary special, here’s my most unrealistic dream scenario (which I full expect not to happen) -  in addition to (or instead of) a multi-Doctor story featuring all of the Doctors, a new television story for each of the surviving Doctors, to be concluded with the Matt Smith one, with each being connected in some way. Explanations as to the older and fatter appearances of the older Doctors can be taken care of with a single line (just like it was in Time Crash). Ideally these new adventures should be written by a writer who wrote for the Doctor during their Doctor’s era (though in the case of Paul McGann, the choices are rather limited so we can count the audio adventures as his era) - for example - 4th Doctor Chris Boucher, 5th Doctor - Chris Bidmead, 6th Doctor - Eric Saward, 7th Doctor - Rona Munroe 8th Doctor - Rob Shearman, 9th Doctor - Russell T. Davies, 10th Doctor - Paul Cornell 11th Doctor - Steven Moffat. Well, a fan can dream, can’t he?
3. Two completely missing stories (one for each Doctor) animated and broadcast on television on one of the three BBC channels (who can help fund the project to make this feasible) - ideally I’d suggest Marco Polo and The Power of the Daleks as the earliest one for each, but if the funds were only available for a 4-part story, The Massacre and The Highlanders would do nicely. Both stories to be released on DVD & Blu Ray with extras after the broadcast.
4. Here’s one which is entirely realistic to happen. Both surviving original cast members of Doctor Who - Carole Ann Ford and William Russell - to appear in the main Anniversary special. Not with old clips, but as they are now. Before the continuity complainers come in and object that all of the Time Lords are dead so Susan can’t come back, that (just like the appearances of the older Doctors) can be fixed with one line. And we can safely ignore the suggestion made in The Sarah Jane Adventures that Ian (and Barbara) are immortal and never age, since there’s not anything in Doctor Who (the tv series that is) which indicates why that should be the case and even in the SJA episode in question it’s only suggested to be an internet rumour. We shouldn’t let trivial continuity issues like this get in the way of what would be a wonderful moment, as we would be very fortunate to have any original cast members to appear in Doctor Who 50 years later.

We’ll be back with some more dreams soon…...but in the meantime feel free to suggest some of your own in the comments section.

Posted by Luca on Wednesday, February 1 at 5:37 am

THE BATTLE OF THE BODY PARTS! - UFC EXCLUSIVE EVENT ANNOUNCEMENT >>

In Terrance Dicks’ novel “The Eight Doctors”, the current (i.e. 8th) Doctor loses his memory, and he has to trust the TARDIS to bring him back to each of his previous incarnations to fill in his memory blanks.  Perhaps something along those lines?

If not, I do like the idea of one episode per past Doctor.

We can but dream. And possibly hold a hostage or two.

I don’t think we need to have everyone back playing their original characters. It’s just too tough to try and explain why Colin Baker looks old now, etc. Why not instead do what Big Finish did with Zagreus and BBV did with The Airzone Solution and PROBE and cast the actors in different roles? If Philip Madoc could get away with playing half-dozen different parts, then casting Colin Baker as a TV weatherman investigating a conspiracy (as he did in Airzone Solution) wouldn’t be that much of a stretch.

Agree with Alex’s suggestion and also like the thought of some sort of scene between Susan and Ian Chesterton.

It took all of five seconds and one line of dialogue for Moffat to explain away Davison’s older appearance in Time Crash, so I’m not seeing why it would be difficult to do so for any of the older Doctors in a multi-Doctor 50th Anniversary story - heck, you could even use the same line and it would be fine. He even put in a line to explain why River Song looks older in Let’s Kill Hitler than she does in Silence in the Library, and no-one batted an eyelid. I doubt anyone will now, especially in the spirit of celebration that will exist for the 50th Anniverary. Frankly, I’d rather have the older Doctors brought back in clips than to have the actors return in another role (especially as, in some cases like Doctors 8 through 10, they don’t look much different from their time - we never saw how old McGann was when he regenerated so no problems there at all - and it would be a bit strange to bring back some of the older Doctors as they are but bring the rest back as someone else). The Airzone Solution was great for what it was but it was done that way because they didn’t have the rights to do a 30th Anniversary special (or to make Doctor Who at all) - this will not be the case with a 50th Anniversary special.

Some time ago a friend and I started dreaming about the possibility of a (then) ten Doctor reunion. Since another actor took William Hartnell’s place in The Five Doctors I didn’t think it would be unreasonable to have another actor playing the role again—and having the same be true for other Doctors.

I thought David Bradley would make an excellent first Doctor, and Tony Slattery would do equally well as the second Doctor. Sean Pertwee looks enough like his father that he could be a good third Doctor.

From there it broke down. Is there a young equivalent of Tom Baker, for instance?

I was also reminded of a story Jon Pertwee told about when he was starting out as an actor and regularly getting offered parts Danny Kaye had turned down. He resembled Danny Kaye, and producers apparently thought of him as the next best thing, which frustrated Pertwee. He wanted to make a name for himself.