DWIN > Doctor Who Blog > The Days of Dr. Dator and the UnDoctor

The Days of Dr. Dator and the UnDoctor

Blog TO has a great article about the early days when Doctor Who aired on TVOntario, which will provoke nostalgia in those of us over the age of 30 who lived in Ontario and confusion in everyone else. . 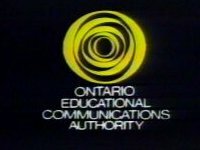 When the Ontario Educational Communications Authority (OECA) began its public television service for the Canadian province of Ontario in 1970, it mostly aired new programming educating kids and adults but following the PBS model also added programming from the UK and elsewhere. One early example was Magic Shadows, which showed a film in serialized format over the course of the week, and Saturday Night at the Movies. The Prisoner and Doctor Who were two early examples of British programming. Who began in September 1976 with a run of Jon Pertwee stories that began with The Claws of Axos. The excellent BroaDWcast site has a listing of TVO’s offerings.

But here’s the rub. In the political climate in which TVO was created, all programming needed to demonstrate educational value, even the shows that were mostly shown for entertainment. They did this in two ways:

You can see this with Magic Shadows and Saturday Night at the Movies which had Elwy Yost providing context in the film world, interviewing people who made the films and (in the case of Magic Shadows) exploring areas of science and nature and history that touched upon the films. 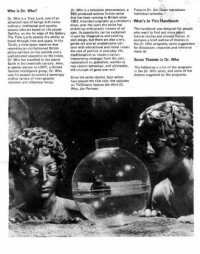 With Doctor Who, they brought on board scientist Dr. Jim Dator. Wearing an orange T-Shirt with “DR. DATOR” emblazoned on it, Dator would be seen at the start of every episode in an introduction where he walked down a street, entered a phone booth and wound up inside an office—a handy way of demonstrating how the TARDIS worked. In the style of Masterpiece Theater, Dator would recap the previous episode at the top of the story, they would then show the next episode, and then afterward, Dator would explain concepts from science, or connect themes between stories. TVO also provided a “Resource Handbook” to the season of stories.

My first time watching Doctor Who ever was watching The Three Doctors in 1976. I remember the Jim Dator introductions quite clearly as he explained to me the concept of regeneration and the Doctor’s different incarnations. Of course for some reason I thought the Brigadier and Benton were past incarnations too—then again, I was only 6…

The great thing about this article is that they’ve managed to find two Dator outros, both from Planet of the Spiders. TVO never kept this material, so its very existence is something of a miracle. They also have several Judith Merrill commentaries as well. I never warmed to Merrill: she seemed grumpy, didn’t appear to like Doctor Who very much (she called herself “The UnDoctor” because she apparently disagreed with the Doctor’s approach to things) and suffered from that condition demonstrated by way too many science fiction writers and fans born before 1970 that they need to YELL TO EMPHASIZE A POINT. That said, I still to this day know Asimov’s laws of Robotics because she talked about it.

TVO managed to get its charter loosened so they didn’t require Merrill by the 1980s. But I’m glad they’ve managed to find so many examples of Dator and Merrill’s work—well worth watching, if only as relics from a very different age in the Province of Ontario.

Posted by Graeme on Monday, September 3 at 8:37 am

I too remember just the tail end of those days on TVO. It was before I was “hooked” but at this time I would occasionally tune into the show, because a friend of mine was always talking about it. And I remember it being the Planet of the Spiders as well. Just don’t ask me what I did last week.

That totally takes me back—I was the only one watching spooky, grainy old British TV on a channel that was ‘good for you’ while my friends watched Love Boat—classic!

I really enjoyed the Dr. Dator and UnDoctor bits as a kid, largely because they would sometimes show clips from episodes that I hadn’t seen.  For that matter, in those pre-VCR days, even when they showed clips from stories that I had seen, it was thrilling, because some of the stories I hadn’t seen for ages and had no idea if I’d ever see them again!

I definitely preferred Jim Dator as well, as he seemed to have a much more affectionate take on the series.  Perhaps I’d actually appreciate Judith Merrill more now, but at the time it seemed as if she often took her five minutes each week to pick apart every plot hole in the episode (that might just be a matter of distorted memories though after thirty plus years).

Elwy Yost showed the Peter Cushing “Dr. Who and the Daleks” film for Magic Shadows over four nights (I believe there was an episode of a serial—perhaps “The Phantom Empire”—on the Friday).  I’d love to see his intros for that again, simply to hear Elwy make reference to Doctor Who.  That must have been in the early 80s, though I’m sure there are others on this board who might remember the date more specifically (I was geeky enough to write down when TVO and the local PBS station, WNED, showed each Doctor Who story at the time, but didn’t write down when they showed the movie).

I met Judith Merril a few times and she was as crabby in real life as in her un-Doctor persona. Plus a bit of an intellectual bully who had all the answers (contrary to how she describes herself as asking the question).

That being said, these clips are a wonderful dose of nostlagia because she sometimes had some relevant and useful things to say. I must say however that I much preferred Dator’s comments, since he never seemed to pooh-pooh the material. Plus, unlike Merrill he would probably never have pushed for The Talons of Weng Chiang to be dropped from the schedule of repeats and would rather have provided context instead of politically correct objections.

Man, I’ve been wanting to see some Dator/Merril intros/outros since I first heard of them (which was probably when the David J Howe reference books came out back in the 90s), and some months ago I wasted an afternoon in a futile Internet search for clips. So I’m glad to have my curiosity satisfied at last.

Now that I’ve seen these, I can’t say they’re the most thrilling TV ever produced, but like the Time-Life Howard da Silva intros they’re of great historical interest for their role in the early days of Doctor Who broadcast history in North America.

PS, the BroaDWcast link in this blog entry basically brings up a blank page. For a working link, replace “/Canada_TVO” with “/TVOntario”