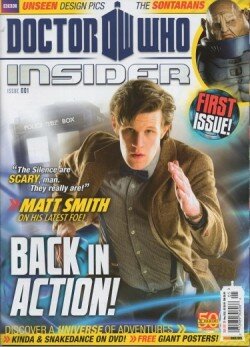 Doctor Who Magazine’s spin-off publication, Doctor Who Insider, launched last spring as a vehicle for promoting the franchise in North America, has been cancelled after nine issues, its publisher announced.

According to a report on the Doctor Who News Page, Panini – publisher of both DWM and DWI – announced in an e-mail on Jan. 27 that it was ending publication of DWI immediately, with Issue No. 9, which was first released to comic shops in Canada and the US on Dec. 8, being its final issue.

During its run, DWI ran a mix of articles on both the current and classic series, as well as large posters. Initially only available in the US and Canada, midway through its run distribution expanded to the UK and a special British-exclusive compilation of the first four issues was released there last summer.

As a regular reader of DWI, I felt it never really lived up to its promise. Launched amid fanfare as the first North American-focused (licensed) Doctor Who monthly, it very quickly became apparent it was simply DWM-lite. Offering shorter articles and extensive illustrations, it was pretty to look at, but always came off as lesser when compared to DWM (which, despite initial concerns it might not be, continued to be circulated to comic shops and magazine racks here, with DWI and DWM often filed side-by-side at places like Chapters and Indigo). And while DWI did turn the spotlight on some North American aspects of Who fandom, you were also just as likely to find promotional articles with little direct connection to North American fandom.

That doesn’t mean DWI didn’t have its moments, such as a great interview with Louise Jameson, and the final issue gave rare coverage to the Scream of the Shalka webcast. And unlike DWM, which suffers from a one-month lag between UK publication and North American sale (hence we got the Christmas issue of DWM in mid-January), DWI was able to provide more-timely promotion of upcoming episodes like the Christmas special. But, really, the magazine never seemed to find its place, not with it mostly covering stuff already covered in more in-depth form by DWM. Add to that the fact DWI was the only (licensed) Doctor Who-franchise magazine to offer no original fiction (neither comic strips – presumably disallowed due to IDW Publications having the rights for those over here – nor short stories), and it was a noble attempt always overshadowed by DWM, which during the same nine-month period released its first 100-page issue, two massive tribute issues to Nicholas Courtney and Elisabeth Sladen, and several Special Edition standalones. Even though they shared some editorial staff, DWI just couldn’t compete.

At this point I’d normally bemoan the loss of yet another print publication and go into a woe-is-us tirade about the fading away of, to paraphrase what “Impossible Astronaut” alumni W. Morgan Sheppard once called as Blank Reg in Max Headroom, “permanent non-volatile physical media” like magazines, but in this case the magazine’s short life was wholly predictable. The good news is its demise will likely free up resources (editorial and otherwise) at the mothership, and reportedly subscribers are being offered a transfer to DWM. Which suggests DWM, now in its 33rd year and soon to hit issue No. 450, isn’t going anywhere, for now.

Nor is DWIN’s own Enlightenment, which recently published its 164th issue and which will continue to hold Canada’s end up for nationally focused Doctor Who franchise coverage.

Land of the Lost

If you are interested the story behind Doctor Who’s lost episodes, have need of historical background on the BBC’s production of early Doctor Who, or required an (un)healthy OD level dose of television nerd serum. Then this book might be for you! 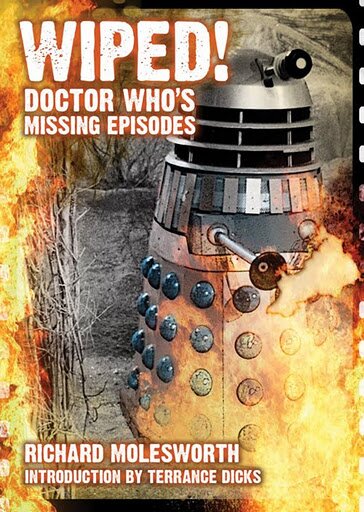 Author Richard Molesworth has produced a wonderful book that shows great respect for the subject matter.  He’s provided us with a compelling and well researched tome.  It can be a bit technical and one wonders if that might turn off a number of fans. I however work in the television industry and enjoy it on that level too.  Too bad the cover is a bit rubbish.

It’s also the first Doctor Who book I’ve purchased since RTD’s A Writer’s Tale.  So in the modern era I’m 2 for 2!  WIN!

Continuing our month long award ceremony for the best and worst in Who in 2011, today’s award goes to something most North American (and international) viewers really could do without…

The Mystery of April Walker

Rod scooped me on the news yesterday that the last great secret of Doctor Who’s past has been revealed, our version of the identity of Deep Throat: Who was originally cast to play Sarah Jane Smith? The identity yesterday was revealed to be April Walker, an actress who later (though not in 1973, Rod!) appeared in Fawlty Towers and other programs over the past several decades.

As I indicated a few years ago on this blog, this was one of those mysteries that fascinated me. I’m sort of disappointed that it’s turned out to be April Walker and not my own pet theory that it was Fiona Gaunt from Moonbase 3 (in the same way I’m sure people were disappointed Deep Throat turned out to be Mark Felt and not John Dean). But there are still some fascinating mysteries to be addressed, such as… 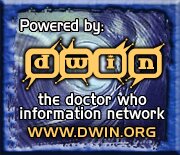