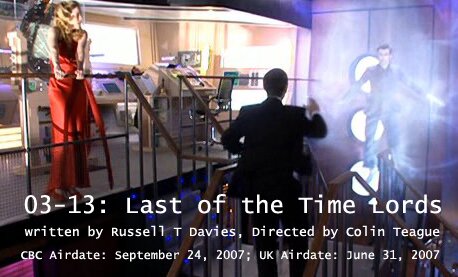 The Big Idea: It’s one year after the events of The Sound of Drums. Martha has traveled the earth where the Master has wreaked destruction in his quest to change it into a new Gallifrey. The Doctor is completely helpless. Or is he?

Some Quick Bits of trivia: Martha’s brother Leo was supposed to be among the people meeting her on the beach, but Reggie Yates was only able to appear in a few short scenes due to another acting commitment. Graeme Harper had to direct the sequence where Martha and her cohorts capture the Toclafane sphere after Colin Teague injured himself.

About 7 minutes from the episode was edited for North American broadcast as the UK broadcast ran at an extended length of 51 minutes. (Yes, you’ll get to see this version on the DVD when it comes out in November). Among the missing scenes:

Not to Complain But… Captain Jack is sadly wasted in this story, though he does manage to destroy the paradox machine (we get the impression he’s been trying for a while). Mostly, though, we’re still shaking our heads trying to understand the logic—or indeed the point—that if the Doctor were to age without dying or regenerating he’d turn into a two-foot tall wizened elf. We keep trying, though.

All Things Considered… Last of the Time Lords sees not only an end to what turned out to be the first three part story of the new series, but the unfolding story that was series three as well. For the most part it takes all the disparate threads and weaves it into a satisfying conclusion. But there were a couple of moments where we were a little worried. To use another domestic metaphor, Last of the Time Lords is the sort of story where Russell T Davies throws whatever he can against the wall and sees what will stick: Great Escape-esque takeover attempts, underground resistance in a grim dystopia, the Doctor being shrunk into a troll doll… The 45-minute version of the episode of the CBC is perhaps an improvement to the 51-minute version you’ll find on DVD. It’s tighter and faster and gives you less time to consider what’s going on.

What it does give you plenty of time to notice is John Simm’s continued amazing performance as the Master. For the first time in Doctor Who, we’re given the terrifying prospect where the Master has won. We see in disturbing detail how ugly and hideous that reality would be and we see how ugly and hideous the Master truly is. The abuse and torture of Lucy Saxon only brings this home. Here we have a terrible mirror image to the Doctor and Martha: while Martha travels the world telling people about the things the Doctor has done and how much she loves him and the incredible sights she has seen with him, Lucy is driven mad by her TARDIS travels and is physically beaten. It’s interesting to note that as the hideousness of the Master’s villainy both on a global and domestic scale becomes more and more clear, suddenly the Master is no longer the goofy comic figure of The Sound of Drums. he’s truly become a monster. To John Simm’s credit, he gets this and makes his performance more brutal

While it’s true that the end of the episode presses the reset button, we think that’s a good thing. First of all it doesn’t go for a Star Trek style full reboot. The core characters still remember everything and it changes the Joneses, Jack—even the Doctor. Secondly, the truth is that a world ravaged by the Master would be a pull into grim reality too great for Doctor Who. This brief taste is unsettling enough.

As a story, The Sound of Drums and Last of the Time Lords hinges on a Deus Ex Machina plot device where the Doctor is miraculously able to restore himself, even make himself briefly godlike. It feels like a dip into a familiar well, evoking Rose’s staring into the heart of the TARDIS. And it is. But there are two things Russell T Davies does to mitigate this. The first is that, like the first time he pulled this stunt, he goes to some considerable trouble to establish it in the plot, with Professor Docherty explaining the vulnerability of the archangel network; the second is that, as with Rose, we need to go beyond the whats and to the whys.

One of the great things Doctor Who has always extolled is an optimism for humanity and what it is capable of. In one of the bleakest scenes in this story, the Master tries to argue that humanity are terrible destroyers. The point of the Doctor using humans to exploit the Archangel Network and restore himself from the psychic energy isn’t just to get the Doctor “back to start” (though it is that)— it’s to reinforce the truth that ordinary humans can save the day, just like Martha.

And the great thing about this story is Martha. Last of the Time Lords brings her story to a satisfying conclusion as she fulfils the potential shown in Smith and Jones, where her resourcefulness keeps her alive for a year and ultimately saves the world. Freema Agyeman does a brilliant job of conveying the changes Martha has gone through while keeping her optimism alive. And then Martha does the bravest thing imaginable: she leaves the Doctor. It ends her character’s arc in a meaningful way.

This is an even braver move for the series to take: Freema Agyeman and David Tennant have considerable chemistry together and the Doctor and Martha made a great team. To end it like this (and even though Martha is coming back mid-season, it won’t be quite the same) is going to be sheer brilliance or sheer folly on the part of the producers. Time will tell.

In spite of some slightly creaky plot devices and what must go down in the Annals of Who-dom as the most bizarre method of making the Doctor feeble, Last of the Time Lords brings to a close the most consistent, exciting and ambitious season of Doctor Who yet. We can’t wait to find out this Christmas (hopefully the CBC will air it!) why the Doctor has crashed into the Titanic!

Line of the Week: “This is me—getting out.”