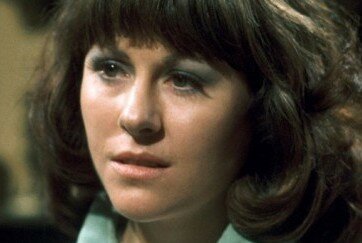 Elisabeth Sladen, who played the Doctor’s companion Sarah Jane Smith on Doctor Who and the spinoff series The Sarah Jane Adventures, died as result of complications from cancer on April 19. She was 63.

Sladen first took on the role of investigative journalist Sarah Jane Smith in the 1973 adventure The Time Warrior with the Third Doctor, Jon Pertwee. In 1974, she saw the transition between Pertwee’s Doctor and the Fourth Doctor, Tom Baker. She continued with Tom Baker’s Doctor for nearly three seasons, forming one of the most beloved Doctor/companion teams ever. Her final story was the 1976 adventure The Hand of Fear.

Successive producers tried to entice Sladen back to the role, but she declined. Her only concession was to star in the 1981 spin-off K9 and Company which saw Sarah Jane, now living on Earth as a journalist, paired with the Doctor’s robot dog. A 45 minute special was made but it never went to series.

Sladen had semi-retired from acting by the mid-1980s when she and her husband Brian Miller had their only child, Sadie. She did occasionally play Sarah in the tie in product made between the classic and new series, including a brief cameo in the 1995 video Downtime and two seasons of Sarah Jane Smith audios for Big Finish.

When the new series came back in 2005, Executive Producer Russell T Davies was anxious to have Sladen appear in the new Doctor Who and she teamed up with the Tenth Doctor in the 2006 story School Reunion which saw Sarah Jane meeting the Doctor decades after his departure. Her appearance was very popular and when Davies was approached to produce a Children’s BBC series based on Doctor Who, he created The Sarah Jane Adventures which saw Sarah Jane at the forefront of fighting aliens and defending the Earth aided by her adoptive son and friends. The series debuted in 2007, and a fifth season was in the process of being made.

Lis Sladen did more than just play a companion of Doctor Who. She made Sarah Jane Smith the iconic companion. Her enduring capacity to gain fans after so many decades, even headlining a popular BBC childrens series, is testament to this.

An obituary is up on the Doctor Who News Page. The BBC Doctor Who website has tributes from Russell T Davies and current Executive Producer of Doctor Who, Steven Moffat.

DWIN would like to extend its condolences to Brian and Sadie Miller, and to all who worked with Lis Sladen on The Sarah Jane Adventures.

<< New season of Doctor Who on SPACE...the same day as the UK and US!