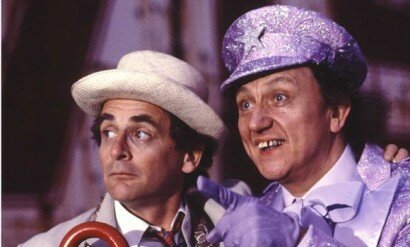 Another one of the most common pet theories put forward by fans which seemed to be stated as historical fact was the theory that John Nathan-Turner casting celebrities in guest-starring roles caused the show’s reputation to suffer and ratings to decline in the UK, leading the BBC to be justified in cancelling the series. The celebrities most often cited as examples are the casting of Beryl Reid in Earthshock, Richard Briers in Paradise Towers, Ken Dodd in Delta and the Bannermen and Nicholas Parsons in The Curse of Fenric. Over the years it wasn’t just a section of fandom that would make this claim, the mainstream media did as well - particularly in historical retrospective articles released for the 30th, 35th, 40th and even the 50th Anniversaries.

Being from Canada, it’s a little more difficult to comment on the effect that seeing these “celebrities” would have on the UK audience. As a Canadian, I’d never heard of any of these people until they showed up in Doctor Who. (Similarly, note that I did not include Dolores Gray in Silver Nemesis in my list of the most-commonly cited examples, because even though she was a Tony-Award winning actress that had co-starred alongside Gregory Peck and Lauren Bacall in the film Designing Woman, by 1988 nobody in the UK seemed to know who she was). Nevertheless, I find it difficult to be convinced that these so-called celebrity casting decisions were inherently a bad thing which did the show much harm.

It’s the examples of Beryl Reid and Nicholas Parsons stand out. Earthshock was so popular with casual viewers and fans alike that its difficult to argue that any part of it did the show’s fortunes any harm. As for Nicholas Parsons, it’s tough to argue that his casting did any harm given that the show had already reached its lowest regular ratings level when the final season started. There’s nothing in his performance that suggests that he was either unsuitable for the role or sent viewers to reach for their remotes (nor is there any ratings or audience research data which suggests this).

What then about the example of Richard Briers and Ken Dodd? They were both cast in the most unpopular (at least with UK viewers and fandom at the time) season of all time, Season 24- arguably the season with the highest concentration of celebrity guest casting. Both celebrities were cast in fairly silly roles, in fairly “light-weight” stories that weren’t exactly known for being dark and mysterious, or for putting kids behind the sofa. It is perhaps much easier to see why these celebrity casting examples might have caused the show’s reputation to suffer. However, when we look at the audience research report for Season 24, when viewers were asked what they didn’t enjoy about the season, it was Bonnie Langford and Sylvester McCoy who took the brunt of the blame. “Silly guest-star casting” (or variations thereof) is not listed as a common response to this question. The only answer which might hint at viewer dissatisfaction with respect to casting celebrities is large portion of respondents who complained about the light-weight tone of the show and the fact that it was, in their eyes, becoming “increasingly silly”. This might be a reference to Dodd and Briers because they were both cast in silly roles in somewhat silly stories.

But isn’t that - the silliness- at the heart of the issue? I can remember in 1989 the teeth-grinding from certain areas of fandom when Nicholas Parsons was announced to be appearing in the forthcoming season, because the assumption was that he was cast to be playing a silly role. Of course, his role was not silly at all, in a story that was not silly at all (in tone at least - let’s not quibble about how silly the scene where Ace seduces the guard turned out to be, as that wasn’t the intention). Criticism of this casting was considerably muted (in comparison to when the news was announced) once the story was broadcast. Had they broadcast The Curse of Fenric and Survival in Season 24 rather than Delta or Paradise Towers, it’s difficult to imagine that viewers would have picked on the silliness of the stories (whether it be the tone, guest casting or storylines). If the viewers still hated the show, it would presumably have been for other reasons and unlikely because Nicholas Parsons puts in a good dramatic performance in a non-silly role. In other words, it’s not the fact of celebrity casting per se which is the issue, but the kind of roles (and performances) that the celebrities are cast in.

The new series has done celebrity casting - especially with cameos - to a far greater extent than the classic series ever did, and the popularity of the show has not suffered as a result. Times are different of course - we live in a more “celebrity-based” culture for one so many celebrities have been cast as themselves in cameos - but the fact that the series’ popularity was not harmed by this further supports the notion that casting celebrities is not inherently bad for the show - at most, it depends on how it is done. For the classic series, the show seemed to have other issues that were far more of a problem than celebrity casting per se (if that was a problem at all).

I think the reason for the late 1980s decline is much more fundamental.  True fans may be loyal to a certain property, but the general public is far more fickle. Things go in and out of style… In the USA, the series “ER” came out of the gate in 1994 to huge ratings, maintained them for a while, but the ratings had decayed by the time it ended. That’s just one example, but audience erosion is very common. There are exceptions to this, of course, but casual viewers tend to grow weary and move on to the next, shiny new thing. People can speculate to the deeper reasons behind it all they wish.

And, of course, a dormant property can be revived to great success, and the cycle continues!!

isn’t that - the outlandishness at the heart of the issue? I can recollect in 1989 the teeth-crushing from specific zones of fandom when Nicholas Parsons was reported to show up in the imminent season, in light of the fact that the suspicion was that he was thrown to assume a senseless part.