DWIN > Doctor Who Blog > The Gangers All Here

The Gangers All Here 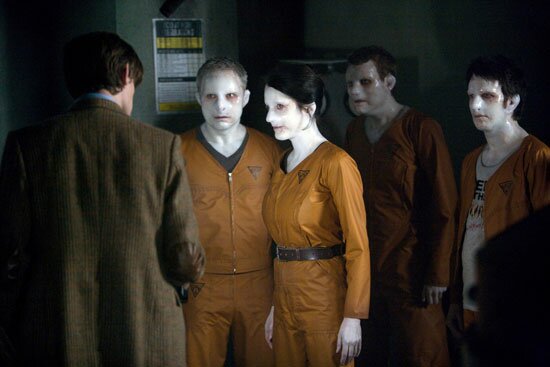 The Rebel Flesh gave us duplicates, base under siege, acid and eyepatch lady. Oh, and Rory stayed alive but it’s still only the first part of a two part story.

What did you think of it? Let us know in the comments section.

We have a TARDIS file here!

Like The Doctor’s Wife, this was another episode I had some worries about. First, despite the fact he has Life on Mars and Ashes to Ashes under his belt, Matthew Graham did give us Fear Her, which is one of the low points of the Tennant era. And, he had the bad luck to have his episode be George Lazenby to Neil Gaiman’s Sean Connery - anything would look lesser after last week’s masterpiece.

Fortunately, I thought it worked well. After a very atypical DW adventure we’re hit with a somewhat traditional one, and that’s fine (well, traditional up to a point).

Hopefully they aren’t telegraphing things too much. I mean, right now I’m sure most people are doing the math and coming up with a solution to the Doctor’s death in The Impossible Astronaut. But I hope Moffat is still able to surprise us.

I also notice that chinks are staring to appear in the Rory-Amy marriage. Hmmm…

The effect of The Doctor’s Wife on me was definitely being felt as I watched this episode, because I kept thinking about how much we were seeing (involving the TARDIS) might be orchestrated by the entity we met last week. In particular, when the Doctor finds the TARDIS buried up to the “POLICE BOX” I laughed because I could just imagine Idris (or Sexy) swearing at the Doctor at that moment!

My biggest complaint though was with the broadcast itself. I don’t know if it’s just Calgary but this is the second episode in a row in which the sound was below-par. Last week, for example, I never heard the TARDIS’ last words as she faded away. This week not only could I barely make out what people were saying (it wasn’t an accent issue), but the music sounded tinny, too. Anyone else notice this? I had an opportunity to view (and listen to) a copy of the original BBC broadcast of Doctor’s Wife and I noticed the difference in sound right away.

Is it possible that the act of adding that (useless, useless) special intro somehow gibbled the sound mix?

About the Tardis file: in what way was the sneezing obvious? Hexachromite?

Amy seems pretty slow on the uptake this time…

@John: Dicken seems to have an illness, or allergy, that could potentially be used to infect and kill the biologically unstable Gangers. The production team seemed, in my opinion, to be drawing attention to the fact that he was sneezing in a manner that suggested they were saying, “Remember this for later. It’s going to be important.”

It wasn’t just Calgary.  There were sound problems in Winnipeg as well.

@Nicole. Maybe someone at DWIN HQ could get the word to Space about this. It wasn’t too bad last week (I only missed that one line) but this time round it distracted quite a bit. It was almost reminiscent of the problems PBS had in the late 80s-early 90s when they aired Sylvester McCoy episodes and sometimes you could only hear the music.

I’m glad I’m not the only person having a problem with the sound mix. I was watching my timeshifted recording this afternoon and was very glad for the Closed Captions. I enjoy Murray Gold’s scoring, but I’d also like to hear what the actors are saying…

There were a lot of (for me) annoying scientific and technical weirdness including:
Serious-but-not so serious solar storms;
Drilling for acid -  why?;
Work conditions so dangerous that clones are required, yet no one had figured how to measure"acid activity” in the vat remotely?;
A weather vane/solar energy conductor ????

And there was too much running around to no great purpose.

Yet, I really enjoyed The Rebel Flesh, and its take on what it means to be human. Yes, these ideas have long been used in Science Fiction, but here they’re being used for a family audience and will be quite novel to a lot of kids.

The make-up and other production values seemed good (excepting the acid pipes).

Oops.
That would be “black spot” rather than “dot”.

@Andrew remember, though, this is part 1 of a two-parter. A lot of that stuff will probably be answered in Part 2. I just saw the Confidential for this and was quite impressed that they were able to complete what was a mostly-filmed-on-location story during the huge blizzard that shut down the UK last winter.

I wouldn’t worry about “Black Dot”. I get the feeling a lot of people consider it one!

One thing that does appear clear, at least based on Part 1, is that with any luck Matthew Graham has put the spectre of Fear Her behind him, at least with Who fans. It’s not getting the same acclaim as the Astronaut/Moon two parter, or certainly not The Doctor’s Wife, but I’m not seeing anywhere near the level of hatred I saw for Fear Her back in the day.

Just watched this and agree that the sound quality on Space was poor - I nearly gave up watching. I just read the TARDIS files and didn’t hear any of the lines that are mentioned in it!

I found the episode lacking (possibly because I couldn’t hear half of it), but there was no tension in it until towards the end - the gangers stayed benign for a long time, and the reveal of the ganger Doctor was obvious.

We’ll have to wait and see, but I’m not sure this is worthy of a two parter - maybe it will turn around though.

I guess I am a bit different here.  I kind of liked Fear Her.  I am guessing that Matthew Graham’s mode of writing is weird spooky stuff with a great ending. I loved the 90ş phase shift with the TARDIS landing in the beginning of Fear Her.

I no longer enjoy this Dr Who.  Matt acts like a bumbling child nitwit who is running n spinning around. Amy always is chasing the Dr (in more ways than one swear she just wants to ****him) and Rory is just an after thought.  No fun, characters are flat and not particularly like able.  Stories have big gaps, not even fillable with Dr Who logic.  Moffat’s writing is empty and shallow.
I will check back in after Matt and Karen leave the show.

Well, that was just… Dull. One-note characters involved in a moral dilemma that’s only a moral dilemma because the Doctor’s there to wag his finger at them. How banal. What’s even more frustrating is that speculation over the intricacies of a painfully drawn-out series arc is taking precedence over storytelling and character development in individual episodes.  Why is this acid being mined, for instance? What’s it for? (Answer: Simply to add an element of danger to an already deeply-contrived story that’s lacking any shred of pace or sense of genuine threat.) Perhaps the most important question of all? How did the writer of “Fear Her” - surely the worst season two story - ever get the opportunity to pen a two-parter? Blurgh.

i want the doctor to get shot or injured or something.make it a two-parter. he gets himself injured at the end of the first episode because hes being all smart mouthed and witty and rushing in to danger like a suicidal maniac with a spacecy penlight as usual, except the people, aliens, evil hybrid computer- whatever hes fighting- isnt stupid and doesnt just let him twirl around and touch things. they shoot him before he can talk too much. i want grit. but dont make him so hurt that he has to regenerate. like, have him shot in the arm or something. then the second one can be about how he has to save the human race- i want it to stick to some sort of tradition here- with a broken or shot up arm. i mean, have we ever actually seen the doctor in the hospital because hes actually injured (ignore the smith and jones episode for a minute). A Good Man Goes To War is all about how the doctor is not a god, hes a mortal. shouldnt moffat be showing that more?

This is a cool blog that I like to read a lot. I love the course on how you construct about it. Thank you so much for it.

Yes…I agree that this is a very fun and interactive blog, with interesting content as well.

Are you able to blog on some things relating to Tarot..just asking? Maybe some useful advice on High Priestess or Lotus Tarot will be good. Thanks.

Hi… I came across your blog by accident. After reading your writing I found that your post is good written and is informative. Thanks for sharing this great blog to everyone.

I guess I am a bit different here.  I kind of liked Fear Her.  I am guessing that Matthew Graham’s mode of writing is weird spooky stuff with a great ending.

Hi,
Honest work in your blog,nicely written and thanks for sharing with us.
So much entertainment with lots of humour.
Looking for more blogs from you side,enjoyed it while reading.

Great Article.! Completely agree with the flow. Thanks for sharing. I am sure other too would benefit from it. Cheers !

hi
Your post is useful.Nice article posted by your team.We are an Android Developer and We are also providing technic for How Hack Roblox And How to Get Free Robux pls vist my blog.