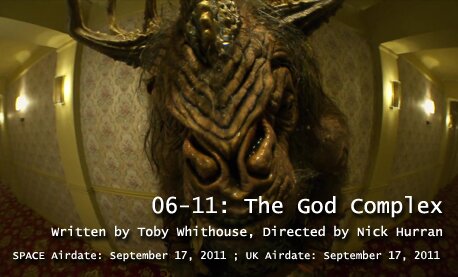 The Big Idea: Somewhere in space, there’s a fleabitten 1980s hotel, and one of its many rooms contains your darkest fear. There’s no way out and there’s a monster roaming the corridors. And it’s going to get you eventually, whoever you are—even if you’re the Doctor. Believe it.

Some Quick Bits of Trivia… David Walliams, who played Gibbis, is better known as one of the team behind Little Britain, and previously appeared in the Doctor Who audio play Phantasmagoria (and performed with Mark Gatiss the comedy sketches in the 1999 Doctor Who Night on the BBC: The Pitch of Fear, The Web of Caves and The Kidnappers). Writer Toby Whithouse has scripted School Reunion and The Vampires of Venice, and created the series Being Human and No Angels (both of which featured medical professionals as characters). And Daffyd Emyr, the cruel PE teacher, previously appeared as a Torchwood agent in the TARDISode for Army of Ghosts.

Did You Notice… There were few explicit arc references in this episode, apart from Amy asking the Doctor to tell her daughter to visit when he next bumps into her, but… well, see the analysis below. Also, when the hotel’s holographic framework folds up at the climax, it does so in a way similar to the Teselactor from Let’s Kill Hitler. Is there a relationship between this hotel, which was set up to punish the Minotaur, and the Teselactor’s mission to punish history’s greatest war criminals? More importantly, who or what did the Doctor see and recognise inside his own room, and why was the TARDIS cloister bell tolling in the background when he saw it?

Not to Complain, But… Deleted Scene Alert: the Doctor claims that Rory keeps being shown a way out, even though Rory has only seen one actual exit on-screen and we never saw him tell the Doctor about it. Also, some of the music is quite inappropriately whimsical and lighthearted for the situations in which the Doctor finds himself, such as searching the hallways for the body of a man he’s failed to save from the Minotaur.

All Things Considered… So there’s this thing, this implacable force, and you know that it’s going to kill you. More than just kill you, it’s going to suck out the very spark of your life—all your hopes and dreams, everything that keeps you going—until you finally die just from not being alive any more. And your faith, the one thing you turn to in your darkest hour, isn’t doing anything to stop it. It’s always there and it’s always going to be there, and eventually, you just give in to it. You not only accept your fate, you begin to look forward to it, even beg for it. It’s just so much easier not to fight it, and in fact, when you stop, the blessed relief of giving up feels like euphoria. Your friends don’t understand, but that’s okay, they’ve got their own lives to live and this isn’t about them; you’re just going to go now, and leave them to get on with things. And when it finally comes for you, when you finally give yourself up to it, you can finally relax into knowing that it’s all over, and it feels… so… good.

Yeah. Fans of classic Doctor Who have often considered themselves to be depressed about the existence of the Nimon, but they probably never imagined turning that into an allegory. The Minotaur isn’t just a monster, it’s the personification of giving up in the face of impossible odds; this plays out even in tiny details like Gibbis’s school motto, “Resistance is exhausting,” which sounds like a joke until you actually think about what it means as a philosophy. It’s not a perfect allegory, and it gets somewhat muddled with the religious imagery (one of the Doctor’s first acts upon arriving is to chow down on an apple, and he later can’t resist his intense curiosity about looking into the face of danger)—but upon consideration, that probably makes the episode more worthy of discussion than a simple point-to-point correspondence would have been.

Think about this: if the Minotaur is getting to Amy through her faith in the Doctor, and if that’s meant to be a metaphor for how depression destroys our will to live, then why does destroying that faith destroy the monster instead of Amy? There’s probably an argument to be made that, rather than destroying the thing that makes Amy’s life worth living, the Doctor is instead telling Amy to see that thing as the childish illusion it is, and to move on to something real. But considering that at least one of the character’s faiths was based in religion, this interpretation is getting into controversial territory that’s probably beyond the scope of this particular review. Not to mention that, taken to the logical extreme, it’s suggesting that we should stop watching this program and go do something better with our lives.

In the end, though, it’s doing nothing of the sort. The Doctor tries to save the goldfish in the hotel’s barbershop, only to deliver it into the hands of Gibbis, who eats it—just as his attempts to protect the people in the hotel end up delivering them to the thing that will devour them. That parallel should alert us to another, more significant one. Rita is a sharp, intelligent person who dies because she turns her back on the people trying to save her and instead embraces her fate alone. She goes to her end gladly, telling herself that she’s doing it to stop her friends from trying to prevent the inevitable and dying in her place. And that’s exactly what the Doctor does at the end of this episode. In Night Terrors, the final shot was of the Doctor’s death date on the TARDIS scanner—but there are no such explicit arc references in this episode. That’s because this entire episode is the memento mori. At the end, the Doctor realises that in describing the Minotaur’s death wish, he’s described himself—and his reaction is to take Amy and Rory “back home” and go off on his own. He’s turning his back on his friends and embracing his fate alone, telling himself that he’s doing it to stop them from trying to prevent the inevitable and dying in his place.

Despite the music’s attempts to convince us that we’re watching another of the Doctor’s wacky space adventures, we’re seeing something much deeper and darker here. The Doctor’s no longer trying to outrun his fate, he’s beginning to embrace it, and that’s exactly what threatens to make it inevitable. The Doctor really is falling further than ever before. Let’s hope that he rises so much higher.

Line of the Week: “I’m not a hero. I really am just a madman in a box. And it’s time we saw each other as we really are.”