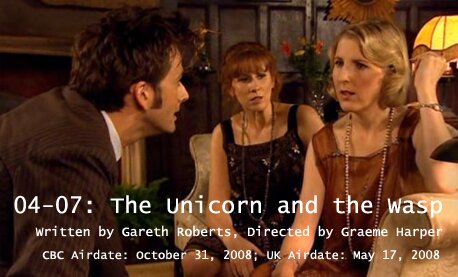 The Big Idea… Never mind the planet Zog, it’s a classic Agatha Christie murder mystery! Is the killer the mysterious cat burglar known only as the Unicorn? Is it the golden boy with a secret? The vicar? The maid? Or is it the giant wasp from outer space? Okay, maybe it’s not *entirely* a classic Christie…

Some Quick Bits of Trivia: Scriptwriter Gareth Roberts had previously written another celebrity historical, The Shakespeare Code, for the 2007 season. Graeme Harper has directed several highly acclaimed episodes for both the classic and current series. Actor Christopher Benjamin appeared in Doctor Who as Sir Keith Gold in 1971’s Inferno, and as theatre impresario Henry Gordon Jago in 1977’s The Talons of Weng-Chiang; he is currently re-enacting the latter role for Jago & Litefoot, a series of spin-off audios produced by Big Finish. David Tennant’s father appears as a footman during the garden party.

Did You Notice…When Donna first hears the Vespiform buzzing, she comments that in 1926, they still have bees—a reference to the disappearing bees mentioned in Partners in Crime.

Not to Complain, But… The birds are singing, the sun is shining, and it’s a beautiful summer’s day when the TARDIS materialises… except that in our Universe at least, Agatha Christie disappeared in the middle of December. Also: everyone seems to know that Reverend Golightly apprehended two ruffians attempting to steal the church’s silverware before the story began, but it’s later revealed that stumbling across the crime made him so angry that his true nature revealed itself for the first time. One assumes that they would have been less pleased had he dealt with them by killing them, but if he didn’t, then why didn’t the two ruffians think to mention to anyone that the good reverend had transformed into a giant alien wasp?

All Things Considered… Doctor Who often does black humour and has a fine turn of wit, but it rarely does pure comedy. The Unicorn and the Wasp does, and it pulls it off tremendously. Occasionally the tone falters slightly, as when Donna notes the footman’s grief over Roger’s death, or when Agatha sharply reminds the Doctor and Donna that people have not died just to provide them with a puzzle to solve; but really, from a narrative point of view, that’s exactly what’s happening and it would be a mistake to take these events any more seriously.

Roberts knows all the tropes of the classic Christie mystery, and he delights in finding new and frequently comic twists on them. We’ve already noted the multiple twists in the flashback sequences and the scene in which the Doctor tries to jump-start his metabolism after being poisoned. There’s also the scene in which the Doctor chases down the killer to a dead end only to find every single suspect there already, and the denouement in the Accusing Parlour, which features: a character doing the Evil Voice once she’s caught out; an ashamed confession from someone who hadn’t been caught out at all; and the Doctor deliberately pointing the finger at people whom he isn’t actually accusing of anything. Best of all is the revelation—as part of the mystery’s solution, no less—that this is a classic, formulaic Agatha Christie mystery precisely because of the fact that classic, formulaic Agatha Christie mysteries exist at all.

It’s difficult to critique this episode, because everything—the acting, the directing, the music—is on top form, and the end result is something surpassingly disposable and frothy. But that’s exactly what they were aiming for with this episode, and given the scares of the next two episodes, the bleakness of the following two, and the brain-meltingly epic sprawl of the season finale, a pure romp was just what was needed at this point in the season, just to remind us that travelling with the Doctor can and should be fun. It’s not often you get to use the phrase “giant alien wasp” in the context of a 1920s drawing room mystery, and these opportunities must be seized.

Line of the Week: “It’s not like we could drive across country and find Enid Blyton having tea with Noddy. Could we? Noddy’s not real. Is he? Tell me there’s no Noddy!”