DWIN > Doctor Who Blog > Ten Observations on Day One at Gallifrey

Ten Observations on Day One at Gallifrey

I’m sitting in the lobby at the LAX Marriott where, mere hours before, hundreds of Doctor Who fans were assembled for the unofficial gathering known as “Lobbycon”—AKA the time where you drink and hang out with other fans and argue the merits of A Good Man Goes To War…

I had to miss out on that last night—I had back problems that sent me to bed early!—but I intend to be there tonight and report on it then.

I was, however, around for Day One of Gallifrey, so here’s some random observations in no particular order:

1) Friday is the “off” day for Gallifrey, ie. the day when fewer people are present. It was packed.

2) In the opening ceremonies, William Russell got a longer round of applause than Paul McGann. Respect.

3) Paul McGann explained what the deal was with that “alternate”, unofficial costume he debuted at con in New Zealand. As I suggested at the time, he was sick of the same limited amount of photos of his Doctor from 15 years ago on the covers of Big Finish audios and, with the help of some fans and the people at WETA, designed his own new costume. He tried to arrange with the BBC to use the costume in promotional materials using his Doctor, but found his requests fell on deaf ears.

5) Best costume of the day: someone dressed as Sarah Jane in her Nerva space station outfit from The Ark in Space. 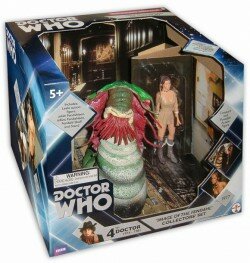 6) Biggest sign we’re through the looking glass based on a visit to the Dealer’s Room: There’s now an Image of the Fendahl action figure playset.

8) A friend of mine was in the lineup for Starbucks in the lobby when she discovered the person behind her in line was Paul McGann. It’s that sort of a con.

9) The panel discussions continue to have a high quality of discussion on all things Who.

10) The most bizarre moment still remains to be passing by someone you think is a Jackie Tyler cosplayer and realizing, actually, it’s Camille Coduri...

Do you use Groupon, Living Social, Buy With Me, Scout Mob and all the other daily deals sites. Then you will love ‘That Free Thing’

Thank you for another great post. Where else may aoynne get that type of information in such a perfect way of writing? I have a presentation subsequent week, and I’m at the look for such info.

It irritates me when pelope over analyze things. Who cares if the story takes place in Indianapolis, Camden NJ, Tokyo or some unknown village in the mountains; it’s FICTION and to me there are no boundaries when it comes to imagination regardless of genre. Is an urban story or any other work of fantasy more believable because it takes place in a big city like NY or Philadelphia? Every country, every state has a “ghetto” or “bad neighborhood” regardless of where it is on the map. If every book took place in the world’s largest known cities then I think we would all be bored. As a reader I always read with an open mind because I know the story stems from the imagination of the author. I’ve never been to Indianapolis or UK so I wouldn’t care about the setting as long as the story intrigues me. I’ve never been to Maine either but I know there are no creepy alien clowns hiding in sewers…or are they?Sorry for the rant and good luck with the book. It is definitely on my reading list.

First of all I would love to thank you for the posting.

The fact is that due to some personal reasons I missed the Day I Gallifrey,
but your article made me feel that I was also very much present on the spot.
The way you have described every nooks and corner of the event, it really makes me feel that I am on that place.
Thanks a lot..
Keep Posting..
Great Work.. Very appreciable..

Me too misseds the Day I Gallifrey, though aqttended the next day..
Thanks for your great comment..
It helped..
Regards
Josh
a1albuquerqueprinting.com/

Hey Guys!! I am Also There.. To Enroll My Name in the Missing List of Gallifrey Day I..
I feel so bad, that I missed it.
But your Blog is Good Enough for me to join the missing Pujjles..

Excellent observations you have their. Thanks for sharing these ideas and your critics.

Oh My God!!
I thought its only me who missed the show..
But there are so many others too…
Thats surprising..
Anyways like all of them, I am also very very satisfied with your blog..
And truly speaking your observation and critics helped so very much..
Thank You

hey, Guys..
Here’s Sarah..
And I am adding Myself to the list, of the non-watchers.
I was out in a business tour which led me to miss the show..
:-(
But, you observation became my eyes…
Great Work..