THE BATTLE OF THE BODY PARTS! -  UFC EXCLUSIVE EVENT ANNOUNCEMENT

In this UFC Exclusive two of the universe’s most feared creatures will face-off in this Single Entity tag team match!  Alter Egos.  Flipside of the same coin.  Same persons.  Two Different Incarnations! 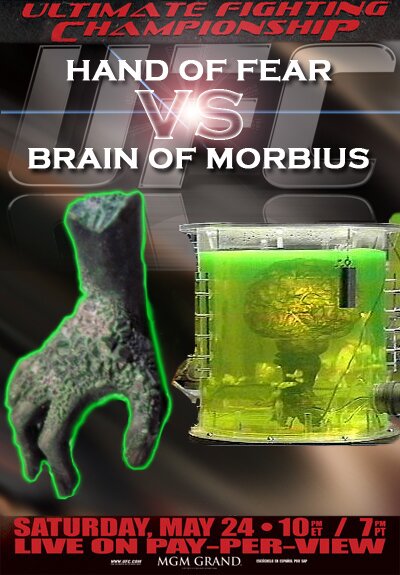 Entering into the Octogon this spring: THE HAND OF FEAR!  Eldrad’s sentient torso free appendage -VS- THE BRAIN OF MORBIUS! The tyrant TimeLord’s disenskullified grey matter (brain stem included)!  This Battle of Body Parts is a must see pay-per-view event.  Who has the edge?  The unmanicured manos of Eldrad?  Or the squishy oozy floating brain of Morbius?  Literally the physical vs. the mental.  Mind over matter!

AND THEN… if you think it couldn’t get any more insane both Eldrad and the Morbius monster will take center stage and duke it out for the championship!  With the kid gloves off, and the body parts reattached these two will see who is truly the boss of bosses! 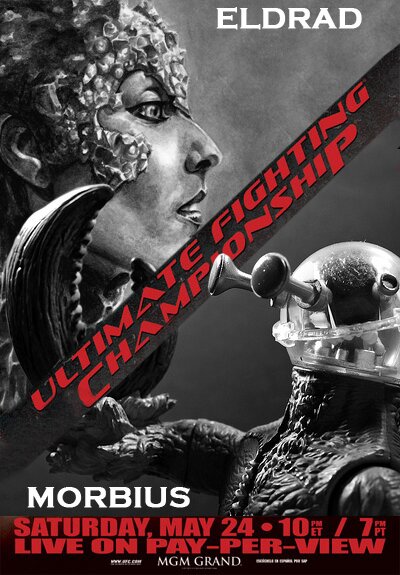 The 150 million year old, former hero of Kastria, Eldrad knows no fear as having been destroyed by King Rokon’s obliteration module once already is more than enough to banish all trepidation and give her the nickname The Hand Of Fear.  Eldrad, a creature of few words had but 6 to say at a recent news conference. “Eldrad must live.  Morbius must die”.

The Timelord Morbius from the House Dvora, The Scourge of Gallifrey, leader of the Cult of Morbius, master of the Death Zone, member of the Order of the Weal, and the King of Karn is now free and in control of the Solon Monster.  This deadly creature was created by Dr. Mehendri Solon, cobbled together out of sundry alien parts such as the lungs of a Birastrop, Condo’s left hand, Justin Bieber’s buttocks, Abe Lincoln’s feet and Lobsterboy’s Right arm!  The creature defiantly and eloquently called out his opponent, and espoused his philosophy on life, warfare, art, beauty and single combat: “Arrrrrrrrrrrrrrrrrrrrrrgggggggggggggg”.

Arg.  Arg indeed.  It will be a brilliant battle.

Maybe it’s a bit obvious, but I think the Hand has the advantage in the first match, but the Morbius Monster has a good shot at taking the second, and is perfectly capable of rendering Eldrad handless with that big claw of his.
Have the Evils faced each other yet?  Face v Planet v Mind?  (Xoanan v the Anti-matter monster makes sense, but I’m not sure how to get the Keller Machine in there)

Did anyone watch UFC on Fox, Mark Hunt vs Bigfoot?
youtube.com/watch?v=f9VdoJkLH40

It is not surprising, then, that complex social situations may be perceived quite differently by the various members of a group. Members may also have different reasons for joining the group, and be working toward different goals. Nonetheless, the group has some reason for being. Some sort of unification and direction is needed if it is to function smoothly and to achieve its ends.

That is really interesting information. We provide best Fitness service to our customers in California and its’ near place in United States. Please do visit at our website or contact us any time, we would love to help you.

That is really interesting information for me.i acknowledge your information sharing.
Please do visit at our website or contact us any time ,we are pleased to work with you.
sportslivetv.net

its a great blog and attrative blog.

Thanks, However I am encountering problems with your RSS. I don’t understand why I am unable to join it. Is there anybody else getting the same RSS issues? Anyone who knows the solution will you kindly respond? my web page gmail sign in gmail login account signin-gmail.net

I just stumbled upon your blog and wanted to say that I have really enjoyed reading your blog posts. Any way I’ll be subscribing to your feed and I hope you post again soon. I suggest to visit this website. SigninPages.com

It is wonderful to read your post and you give wonderful inforamtion about horoscopes. Please keep posting such kind of stuff. [url=“believetreatmentcenter.com”]alcohol treatment centers
[/url]

this article is helpfull

To sign up for a gmail account can sign in
. Gmail is one of Google ‘s indispensable. To open a new
, you must follow certain steps. Problems related with Gmail can be read from this site. Google GMail is making constant innovation. They must follow immediately.

I’ve been following this site for a long time. Very useful articles. I publish my blog articles in your beautiful way. Thank you very much for everything.

Have we seen much of Morbius?

you can bet on the new doctor who here https://betfect.com/

Your article about body parts battle is very interesting and informative.